Winston did it, Maggie did it, it’s your turn now Boris! 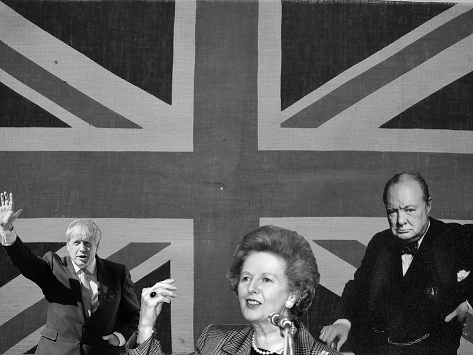 Three Prime Ministers, one could say all of them both loved and hated, two of them often even described as controversial, but you might ask yourselves what is the connection between all  three of them? Well, the connection is that the current Prime Minister, Boris Johnson, is facing a similar situation as the late Sir Winston Churchill and the late Baroness Margaret Thatcher, they all were voted as Prime Ministers and experienced some troublesome times during their terms, low polls, disapproval, and such… until War came.

It is no surprise, as we look at history that good handling of troublesome times has a big impact on the career of previous Prime Ministers. In the early 1980s, right before the Falklands war (which this year will have its 40th anniversary), the popularity of Mrs. Thatcher was going down, but as she acted quickly and performed marvelously in liberating the Falklands Islands, who are indeed British, her popularity went up and she won the 1983 Elections with a landslide.

Before that, the hero of the war, the one that saved Europe from the evil Nazi regime, Sir Winston Churchill enjoyed the love of the people, not only British but from the whole world, until his death in 1965.

Unfortunately, today the United Kingdom and the world are now facing another catastrophic event, as the Russian and Ukrainian tension escalated in the past few weeks, to the Russian President, Vladimir Putin, launching an attack on Ukraine. Boris Johnson is once again faced with another crisis, many people are still divided on his handling of the Pandemic, would this be the chance for the Prime Minister to improve his reputation?

The Prime Minister and the Foreign Secretary, Liz Truss have been working on helping Ukraine, since late 2021. As Ukraine is not part of NATO, we could not interfere or send any troops to help, but Liz Truss has made in my opinion, a very smart decision of opening a path for volunteers in the UK, willing to fight in Ukraine and help its citizens, as she stated that ‘she will support Britons who want to fight against Russians in Ukraine’, this once again helps UK troops in a way to enter Ukraine and help defend democracy, without breaking any regulations.

In terms of NATO, again Liz Truss said that the UK needs to ‘invest more in its defense’, it shows us that NATO and Western countries, in general, stopped preparing and upgrading their defence equipment after World War II and the Cold War, as if they ticked off the possibility of something scarier happening.

But what has been surprising is the enormous support and all the western countries coming together in a union to defeat an evil tyrant and protect freedom and democracy.

But where does this leave Boris, one might ask? The Prime Minister has been traveling to Eastern European countries bordering Ukraine and holding talks with their leaders, at this point this is the most that the government could do, an attack would not only break the NATO policies, but also would be a move that contains a lot of risks. Many people fear that Vladimir Putin might attack the United Kingdom, as an article in the Daily Express showed a graphic the casualties and the impact if a nuclear strike was sent to London, I do not believe the possibility of such an attack, even in the 80s, during the Cold War such rumours were present, none of which a fact.

The Prime Minister was confronted by a Ukrainian journalist on Tuesday, it was sad to hear her emotional plea, but I am afraid she was speaking with emotions rather than practical and possible solutions to this crisis. The Home Secretary and The Prime Minister have also been accused of hypocrisy in terms of accepting Ukrainian refugees, but the Visa process has been very good in terms of helping whilst preventing any potential Russian spies or people that could simply be dangerous to the national security.

In terms of what Boris Johnson could do next is offer the full support that the UK could offer, which he has been doing, and continue to fight in partnership with the United States to fight for peace and democracy in Ukraine, and in general Eastern Europe.

As history has shown the partnership between the UK and the US has been very successful in times like these.

In the end one hopes that this soon will be over, and the people of Ukraine will get the democracy and freedom that they deserve, from the evil tyrant Putin, who has the sick ambition of recreating another Soviet Block.

Until then, it does not leave us with much to say than, Slava Ukraini!

Is nuclear warfare on the horizon?