The unseen impact of isolation: Drug addiction in lockdown 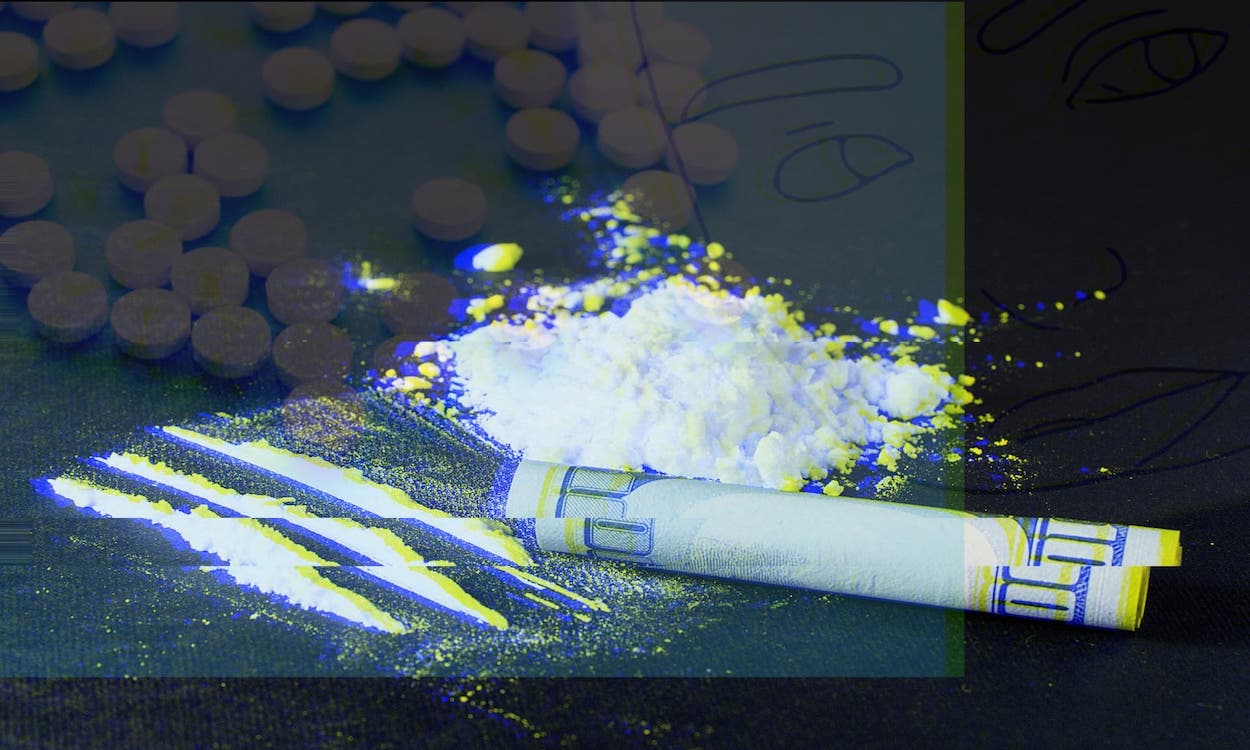 It was the early hours of the morning, fairy lights flickered, and a multicoloured array of constellations extended across the darkened room. The floor was made up of clothes, dirty plates, empty mugs and glasses; the bomb residue of forgotten reality. Tiny steppingstones of cream-coloured carpet wove in and out of the chaos. The room’s occupant didn’t need them though. Ivy floated motionless above her bed, her body made of air, her eyes seeing nothing, her whole body numb, weightless.

The gram of cocaine she had done that night surged through her veins, each grain catching rides in her bloodstream, blissful. But that wasn’t what was making her float, the Valium cascading throughout the nerves in her brain had taken hold. How many? She can’t remember, but then again you can’t remember much when the Vallies take over. All capacity for sentience had disappeared as Ivy hung, suspended from existence; the world continued to spin, and Ivy stayed still.

A recent survey by a Scottish drug treatment and education charity found that over half of their respondents reported taking drugs more often during the past year of pandemic life. Reasons for this increase in use ranged from boredom, loneliness, stress, and fear, amongst others. It’s not surprising that humans are turning to drugs or relapsing – anything to numb the hand of pain and uncertainty that this past year has dealt us. There has been a reported rise in Ketamine usage, how ironic that it is a dissociative anaesthetic, a psychedelic that distorts sensory perceptions and produces feelings of disconnection or detachment from the environment and self. What better time to use Ketamine than during a global pandemic?

Ivy didn’t want to feel disconnected, she wanted to feel elevated, to feel the sense of power and energy that only fine white powder shooting up her nose could bring.

How can we escape the mounting feeling of burden stacked upon our shoulders, growing heavier and heavier as the pandemic rages around us?

Cocaine is all she believes she has at the moment, without it she would have nothing; nothing to look forward to, nothing to feel except an emptiness, a nothingness that cannot be filled in any other way. How can we escape the mounting feeling of burden stacked upon our shoulders, growing heavier and heavier as the pandemic rages around us? Many feel immune and detached from a seemingly intangible illness, yet that illness is putting our lives on hold. How do we navigate this unprecedented situation we find ourselves living in? We are confused at best, and infuriated at least.

Ivy’s mental health began to deteriorate. She felt lost; the planet around her was fragile and broken, like the wing of a butterfly, furiously beating but unable to take off. She couldn’t hold her crumbling existence together, and all she wanted to do was make her world, our world, feel solid again.

Drugs are a coping mechanism, a way of escaping this weird, f**ked up time. You are high, so it doesn’t matter – in that moment of euphoria, nothing really matters. Substance abuse is the silent pandemic; the health crisis no one talks about, and yet, drugs are pandemic-proof – they will never go away.

We are being told that it is dangerous to be close together, but for those suffering with addiction, the safest place to be is close together.

Over 81,000 drug overdose deaths were recorded in America in the 12 months ending in May 2020, the highest number ever recorded, according to the Centers for Disease Control and Prevention. The report indicates that COVID-19 has exacerbated the circumstances that make substance abuse more likely, and recovery more difficult. The level of self-isolation and social distancing that individuals are experiencing is not conducive for those that are fighting substance abuse disorders. We are being told that it is dangerous to be close together, but for those suffering with addiction, the safest place to be is close together. Addicts can’t go to support groups, and yet face-to-face interaction is key to maintain sobriety.

Sometimes Ivy doesn’t like how much she wants cocaine. The craving, wanting to feel the tiny, white grains sweeping through her nose, even above the actual feeling she gets afterwards; it’s the sensation of that line disappearing. But it scares her, the feeling of need; more powerful than seeing a bank balance deep into its overdraft, the coke will always come first. It comes before everything – friends, family, money – the deep longing inside her is too strong.

When she was younger, it felt like Ivy was living a secret double life. She existed in two different worlds, pursuing the secrecy that comes with drug use, separating herself from those around her. At times it has made her feel distant and lost, maybe the relationships with those people that she didn’t hide from would have been better if she didn’t snort so much. Maybe she wouldn’t feel disappointment and anger towards herself, maybe the guilt and shame would slowly begin to ebb and fade.

But, is the paranoia, the sharp edge that coke brings, worth it? Is losing your voice, a voice that has so many useful things to say, a price you are willing to pay? As you take cocaine for a longer and longer period of time, the opposite effects of the high will start to take effect. Your emotions become blunt, sadness begins to seep over you, and there is a withdrawal from others that is hard to notice until it is too late. In using cocaine to self-medicate, and achieve happiness and confidence, the opposite is happening. People all over the world are using drugs to distract themselves from the new normal of isolation and disconnection, yet what they don’t realise is their self-induced detachment is separating them further; that the horizon is becoming more distant.

It was as if time didn’t exist; her room was a bubble floating away on the breeze. She would jump from lily pad to lily pad, not touching the murky water in between, everything below the surface lost and void of touch.

Most of Ivy’s memory from this time is blank – she has no recollection of existing, but there would be small moments where her mind would return to the room. She would see her bright white cupboards glaring back at her, or the phases of the moon smiling down from a tapestry hanging on her wall. It was as if time didn’t exist; her room was a bubble floating away on the breeze. She would jump from lily pad to lily pad, not touching the murky water in between, everything below the surface lost and void of touch.

Hours passed that Ivy would never get back, with fear and confusion temporarily engulfing her long after they had left – where had they gone? Had she been there? As time went on, she returned to being an empty shell. She could feel nothing. A numbness presided, favouring the dark, drawing curtains on the sunlight. There was a barrier between Ivy and the outside world. She was inside, tucked into her soft sheets, with little blue pills, an unfurled note, and scatterings of white dust collecting on her bedside table.

Afterwards, as the drugs slowly seeped out of Ivy’s system, she felt a strange conflict of wanting more, but also the desire of never wanting to touch drugs again. She craved control, yet never wanted it to slip from her grasp. She wanted to feel grounded and connected to the Earth, instead of completely distant from all of life.

Where is Ivy supposed to go, when seeing the people she loves and feels supported by, is illegal?

Who can tell if we are silently screaming for help when our faces cannot be seen behind mandatory face masks?

The scary thing is that the data is behind, we won’t see the figures on substance abuse during COVID-19 until after the fact. The world is going to look back on 2020 and see all the mistakes that were made, and the disservice that was done to those on the fringe of society, suffering in smothered silence.