Falmouth, Fascism and Graffiti: Have people got their priorities straight? 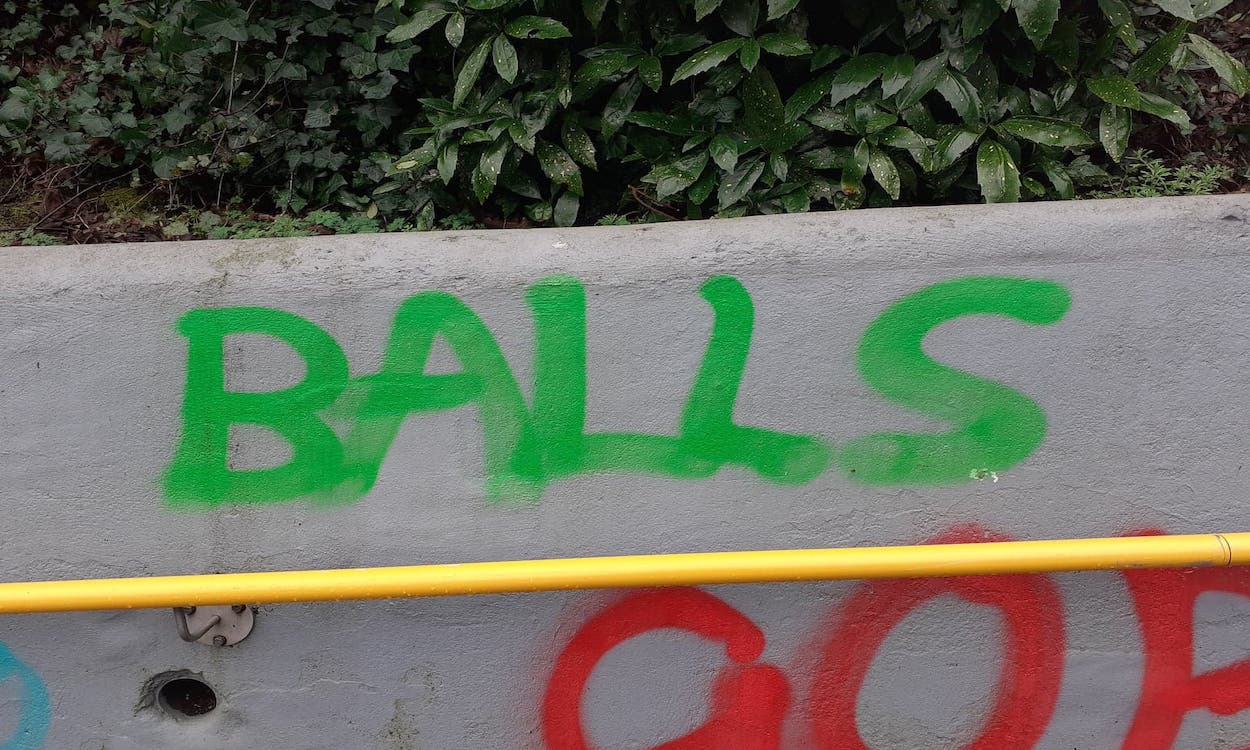 “Balls” – Image of graffiti taken by Gaia Pitt-Judd in Falmouth.

In the early hours of the 18th January, four individuals, shrouded and masked, rambled their way through Falmouth town, spraying butterflies, various expletives and scribbles as they went, creating a free, courtesy art trail for Falmouth residents. The outcome of which, sparked a torrent of local vitriol and fascism debates across the Falmouth Packet comment forums.

Now, I’m not saying that spraying the f-word on the side of local businesses is necessarily the right thing to be doing with an expensive paint can, but nor do I think these individuals were mindless, malicious vandals. Given the extremely early hour, the lack of artistic talent and the stupidness of painting the whole town with asinine doodles, my first thought is that they were probably off their faces, and secondly, they were just bored!

Everyone is dealing with this pandemic in their own way and for some, that way may be going on a painting spree across town, to break up the monotonous hours they are spending at home. For others, it may be taking out their frustration on these easy targets in the comment sections of the Falmouth Packet.

Oh, dear Falmouth Packeters, it’s so sad that you have to repaint your fences, it’s not like you’ve got anything else to be doing is it? Surely having permanently immaculate fences that you paint every week fits in with your picket fence, small-town mindset. If anything, these ‘vandals’ have given you something to do during this lockdown, maybe you should be thanking them instead.

There are always going to be young people with paint cans, which means there is always going to be graffiti. Instead of condemning graffiti, surely there is some sort of compromise that can be found. Rather than getting angry and venomously publicising the ‘crime’, there should instead be solutions for those who want to engage with graffiti. Yes, the scrawls from Sunday 18th January were not the best art form that one could hope for, but as one Packet commentator said, “just give these kids a wall somewhere and encourage them to put real art on it”.

Young people at the moment are frustrated and fed up; their lives are being put on hold and there is not much to do with their time, of course they are going to paint on public property if there is nowhere else to go. Public property, which by the way is dedicated to public use…is it not?

Instead of spending inordinate time and money on trying to capture these kids, who let’s be honest, are not going to be found and who probably don’t care one iota about the situation, let’s spend that time and money on creating a space within Falmouth that people can go and paint on without fear of reprisal. Then maybe those who want to paint won’t feel they have to creep around at night to do so.

Graffiti is a form of personal expression and everyone has a right to freedom of artistic expression, much like the freedom of speech those lurking within the Falmouth Packet comments utilise. Graffiti artists hide behind their art, much like the commentators who hide behind their usernames. It seems bizarre to me that people get so intensely riled about issues that in the grand scheme of things are actually minute. One user even said, “could a drone with night vision not be used over the town…” Right, yeah of course, let’s spend taxpayer money on that – I’ve already given too much airtime to this comment.

When discussing the situation with those who live in Falmouth, one individual said: “These comments are f****** stupid, because they suggest the unfeasible, I feel people have a bee in their bonnet about vandalism, and it’s honestly super harmless. You read the comments and you just know these people have nothing better to do. The fact that this made the news makes me glad that it wasn’t something more serious.”

I think it speaks more about Falmouth that residents are getting defensive about the word fascism than it does of those who wrote it. Why so defensive Falmouth? Does it make you uncomfortable? Surely in censuring the activities of Sunday 18th you are practising a form of fascism…no?