Those hoping to hit the beach this half-term are advised to be aware that Portuguese man-o-war are washing up on Cornish beaches.

Local conservation group the Friends of Portheras Cove recorded 63 sightings this Monday morning on a northwestern coast near Pendeen, and more man-o-war have been spotted near Porthcurno.

Despite their jellyfish-esque appearance, the truth is that these marine creatures are not actually jellyfish at all. In fact, each Portuguese man-o-war is actually a colonial hydrozoan.

Instead of being one individual animal, each man-o-war is the result of cooperation between many small animals called zooids all acting together.

“If you see them on the beach, admire them, they’re beautiful, they’re lovely creatures, one of nature’s marvels. But don’t touch them.”

This unique “all for one” evolutionary strategy may seem somehow reminiscent of hivemind aliens, such as Star Trek’s Borg Collective.

Each individual zooid has its own important role in the man-o-war collective (such as feeding, breeding, stinging, or floating), and is helpless without its fellows. Only when they are all together can they unite to form the “creature” which is a single Portuguese man-o-war.

“They’re quite incredible creatures, actually…Hydrozoans are particularly weird in this colony-type living, and then you have a subgroup called the siphonophores, of which Portuguese man-o-war belong to the siphonophore group, and they’re the ones that have this gas-filled bladder, the float, that stays on the surface while the tentacles are below.” 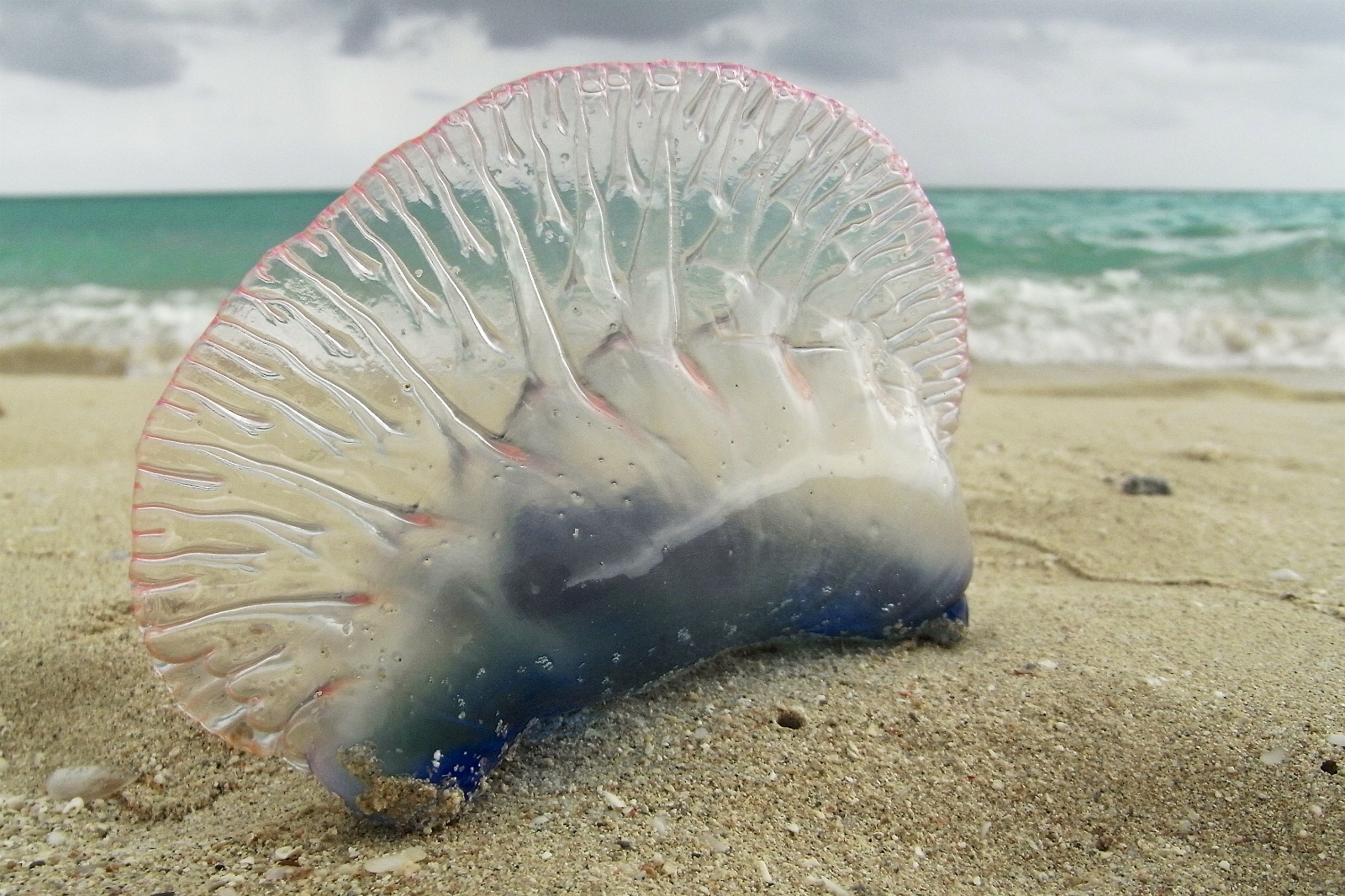 They may look like jellyfish, but don’t be deceived. Image credit: Francis Mariani/Flickr

This intriguing ocean explorer uses its buoyant gas bladder, or “float”, to travel the sea, bobbing at the ocean’s surface as it is swept along by wind and tide.

According to the Cornwall Wildlife Trust, the species was named  after an 18th century armed sailing ship, since the shape of their float resembles a ship at full sail. Although typically found in tropical or subtropical waters, the Gulf Stream does bring a few man-o-war wanderers to Cornish shores each autumn.

They feed on small fish and floating sea snails, using stinging tentacles to subdue prey. These tentacles can be up to 165 feet long, and retain their sting after death — so beachgoers are advised to look, but don’t touch.

As Webb said, “If you see them on the beach, admire them, they’re beautiful, they’re lovely creatures, one of nature’s marvels. But don’t touch them, don’t poke them with anything, they’re still capable of stinging several days after stranding.”

The public is also encouraged to contact the Marine Conservation Society or the Cornwall Wildlife Trust to record any sightings, and help further our scientific knowledge of these dangerous drifters.