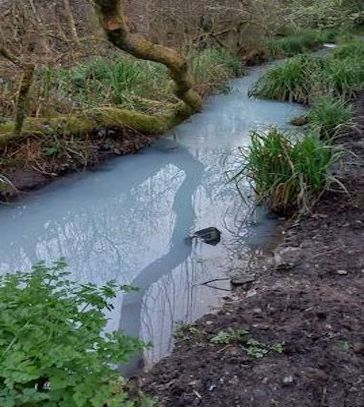 Locals in Falmouth reported seeing polluted streams in Tregoniggie Woods last week. The Friends of Tregoniggie Woodland group discovered a stream covered in what appeared to be cloudy liquid.

The photos were taken by Christine Scarlett on the 17th of March. She said she felt like “retching” seeing the wildlife swimming in it.

Some stated it was industrial waste, yet others said it was a sewage leak. The photos appear to show the water being tainted with a white cloudy substance, which has been pointed out to look like detergent. If that were the case, then all fish and mammals in and around the water would certainly be dead after ingesting the substance.

Due to this, a ‘Yellow Fish Scheme’ is being launched soon in the hope of making people more aware of what they flush, to protect animals’ habitats.

Tregoniggie Woods is a treasured local area which has been a part of many residents lives. The Environment Agency has been notified of the polluted area, although the source of this leak has not yet been determined.

Pollution in Tregoniggie Wood is not unusual, as there were reports in October and December reported in other outlets.

If you see anything in the water, please report all pollution incidents using the Environment Agency hotline on 0800 807060.