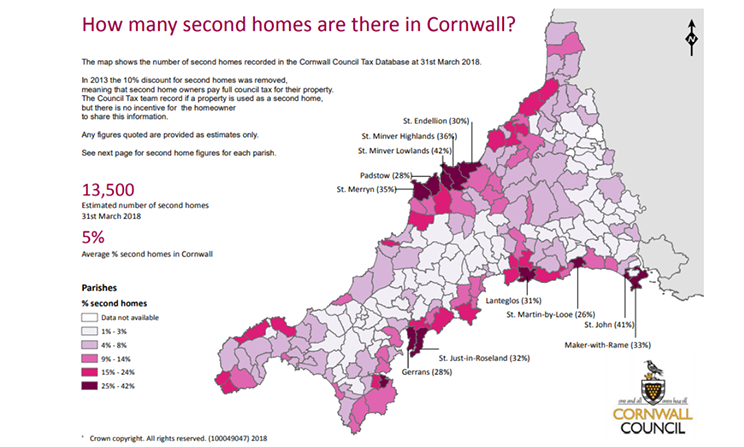 Second homeowners in Wales could be receiving a 300% tax increase from the government following a continued struggle with the housing crisis.

A similar struggle to find affordable housing is experienced in Cornwall, with parishes like St Minver seeing second home stats reach as high as 78%.

In an information pack released by Cornwall Council last year, it was identified that 44% of the second addresses listed by residents outside of Cornwall were being used as holiday lets.

Comparatively, the council also outlined how many second addresses owned by Cornish residents were being used as holiday lets, totaling at just 4%.

After recently being asked about Wales’ new tax policy by the BBC, people have taken to social media to give their opinions on the matter, stating that they feel as though it would be wise to utilise a tax increase on second homes in Cornwall as well.

“If people can afford second homes, then they should pay more council tax – something has to happen so that people who can’t even afford their first home have more chance!”

“Yes, it should happen in Cornwall. Also, all the owners of student accommodation should pay the going council rate like the rest of us.”

“Definitely. This needs to be done before some of our towns and villages become ghost towns in the winter. Our youngsters would also stand a chance of getting on the property market.”

However, some took to the post to condemn the idea, with those who own second homes for personal use rather than for business claiming that no one “right-minded” would agree:

“Let us be honest, there is a big difference in having a home for own consumption and letting for profit. Totally different scenarios please bear that in mind with your comments, we definitely fall into the first category and our property is very modest.”

“We have a home in Cornwall which we use for our own consumption, we do not let for any profit and it was our main home. Why on earth does any right-minded person think that we should pay 4 times the council tax? There is no justification, and it is the ideas of envy from those who are suggesting. I feel sure the Tories will never agree to it, it stinks. We are modest income home owners that have worked hard to get to where we are and no one will take it away.”

Cornwall Council gave the following statement on the subject of giving aid to the housing crisis:

“Cornwall is currently facing an unprecedented demand on housing with more than 18,000 people registered with the Council for social housing and many struggling to find rental properties or homes to buy on the private market.

“There are around 2,500 properties in Cornwall classified as being empty and unused for longer than 6 months and we want to encourage homeowners to bring those properties back into use, so they don’t have to pay council tax on an empty home.

“The Council’s Empty Property Loan scheme has already lent over £3 million to property owners, resulting in over 130 properties being brought back into use.

“The Council has a range of help available for empty property owners (see our webpages), including our loan scheme but also help with evidence for VAT concessions (which can be financially significant and beneficial) and other advice & assistance.

“Our customers can tell us about their change of circumstances by contacting us on 0300 1234 171 or online at www.cornwall.gov.uk/counciltaxcontact. Any changes to their account will be updated as quickly as possible. We aim to respond to our customers within 10 working days.

“We do not give discounts for second homes – since 2013, owners of second homes have been charged 100% Council Tax after the Council became the first local authority in the country to end the discount.”