Storm Eunice: How the county is recovering 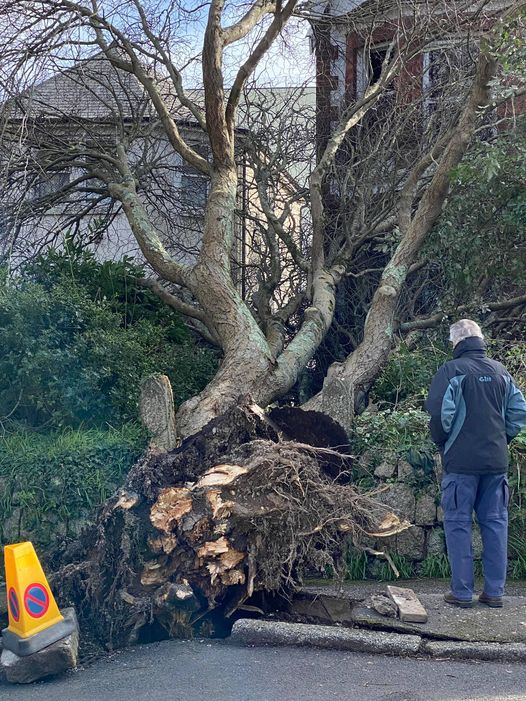 Storm Eunice wreaked havoc on the county last Friday the 18th, damaging infrastructure and leaving thousands without power for days.

Despite the destruction, the clean-up and recovery effort has been formidable, contributed to by many organisations and individuals across the county.

A total of 609 storm-related incidents were dealt with, the vast majority of them relating to fallen trees, with at least 30 roads closed at any one time.

Many of the trees fallen blocked roads, tramlines and key infrastructure, however with dedicated efforts from CORMAC almost all roads were reopened by 5pm the same day.

The electricity distribution took a little longer to get back on track, with some parts of Cornwall not having power until Wednesday the 23rd.

Many complaints were put to electricity distributor Western Power Distribution (WPD), and with teams working overnight and through the following storm, Franklin, all power was back up within 6 days.

St Neot was one of the worst affected areas by power outages, but WPD put their best efforts toward accommodating those without power by supplying a food and beverage truck to serve locals before power could be returned.

Other organisations also assisted the vulnerable during the storm with local group, Falmouth Autonomous Community Space (FACS) opening to host locals in need of refuge, providing homemade soup and bread as well as a safe space during the storm.

Fire stations across the county were also open to affected individuals to access hot drinks, use microwaves, fill flasks and charge mobile phones.

Travellers were put in a tough situation however when a fallen tree blocked the train line to Bristol, all flights from Newquay airport were grounded, ferry services suspended and bus routes limited, however all were back on track by the following day.

As well as transport lines being disrupted, a huge devastation happened at Sennen Lifeboat station, when the roof was torn off by the 80mph winds.

The destruction has now left the institution with huge financial difficulties in their attempts to replace the roof, which could cost up to £100,000.

A fundraising effort has began and over £16,000 has already been raised for repairs.

Despite the widespread destruction, the communities across the county showed their compassion for one another and their sometimes treacherous county, with their generosity of contributions to recovery efforts.

A huge thanks is in order to council services and communities who dedicated their time, energy and kindness.