Cornwall’s Lewis Goldsworthy opened up his 2021 cricket campaign with a century and a half-century against Glamorgan 2nd eleven at Taunton Vale last week. Unfortunately, it wasn’t enough from the Camborne born Goldsworthy, as Glamorgan defeated Somerset by three wickets. 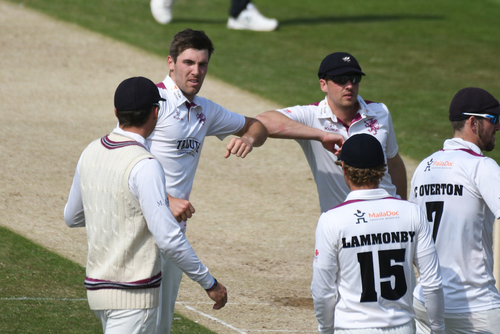 Despite the result, Goldsworthy will be happy with his performance across the two innings. A fine 190 ball 100 in the first, followed by a 138 ball 78 in the second, it’s no surprise Somerset signed young Lewis to a two-year contract back in January of this year.

Speaking to the cricketer back in January, Goldsworthy said: “We’ve got a really exciting group here at the moment with a nice mix of youth players and quality experienced professionals, so hopefully we can build on last year and go one better in the Championship.” This is certainly the hope for Somerset fans who are still waiting for their team to lift that County Championship trophy. With young players like Lewis performing like they are, this dream may be a formality in the near future.

Goldsworthy’s all-round ability is what makes him one of cricket’s young stars, Somerset fans will know this from his impressive 2020 debut campaign. Academy Director Steve Snell speaking on Lewis’s rise last season said: “It was fantastic for Lewis to get his opportunity and to show what he can do with the bat, along with the ball and in the field. He’s a three-dimensional cricketer and he is going to further improve, which is so exciting for the club and our supporters.”

With the departure of Dom Bess in the offseason to Yorkshire, and the ever-ageing Roelof Van Der Merwe. Need for a bright young all-rounder is required, especially an all-rounder who can play all three formats of cricket. This is something to look out for when Somerset set out to defend their one-day cup. With a number of the first eleven players playing in the inaugural hundred tournament, the opportunity for younger players to showcase their skills in the one-day competition could prove vital for their futures. Expect Lewis Goldsworthy to be an important part of that process.

It’s exciting times for the young Cornishmen, whose career with Somerset began in 2016 when he joined the academy after moving to Millfield school. From there, he’s only gone from strength to strength, with England under 19 appearances, a Vitality Blast debut and a contract extension. A bright future is set for young Lewis.