Generation Covid: the young people left behind by the pandemic 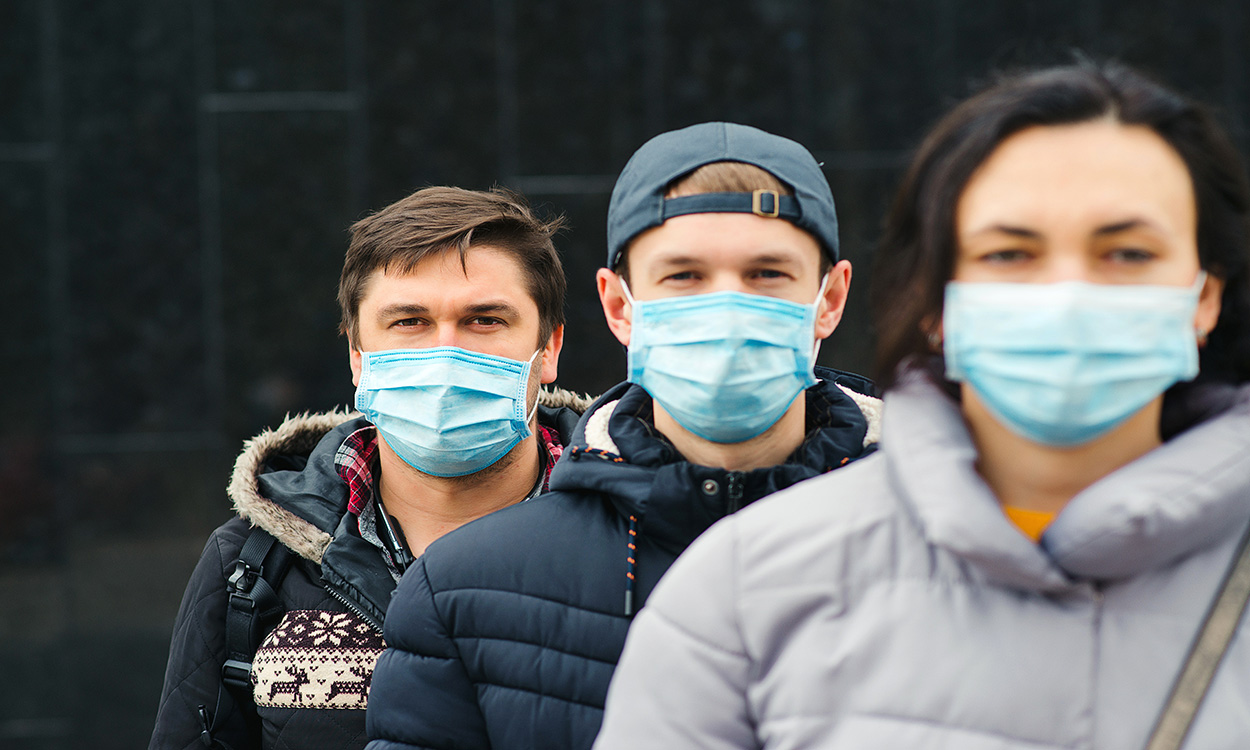 Young people have been disproportionately affected by the pandemic. Source: William Perugini on Shutterstock

Generation Covid: who are we? Well, various news outlets and reports have us aged anywhere between 12 and 34 and depending on your political alignment you either sympathise with us, or you might not like us very much at all. But most of the time, Generation Covid generally refers to the pissed off 16–24-year-olds who’ve been disproportionately affected by the Covid-19 pandemic for the past 12 months. We are the forgotten generation; left behind, and unsupported, and conveniently only remembered when there’s a rise in cases and in need of someone to blame.

There’s no logic in denying that the past 12 months have taken a toll on everybody, no matter who you are, or how old you are. But it would also be more than fair to say that some of us have felt the turmoil of the pandemic, and lockdown, after lockdown, after lockdown… slightly harder than others. You don’t need a doctor to confirm that the mental health of the nation is at an all-time low, a statistician to reveal that employment has been bumpy for many, or a teacher to share that students are struggling. Instead, you only need look around, or speak with friends and family to hear the sad reality of what a year-long pandemic has done for people’s mental health and general wellbeing.

And for young people particularly, we have felt the heavy burden of every single one of these repercussions. “You go through and have to process a lot of feelings and experiences as a young person, and the pandemic only added to the weight of this.” That’s 23-year-old Rachel Blackler, a student at Swansea University, who shares with me how difficult it’s been to adapt to new ways of learning throughout the pandemic, with what she describes as “the heaviness of the world” at the moment.

18-year-old Jasneet Samrai shares her struggle as a student, whose A-levels were cancelled last summer, then started Aberystwyth University in September, in the very midst of the pandemic, only to be studying back at home in Kent, “I am constantly worried about missing out,” she says. “I just miss seeing people as silly as that sounds!” And she’s not the only one. “Covid for me at least has made me reflect on life before, and really made me appreciate the people in my life,” says Jordan Murch who’s 23, living on his own in Bristol and describes feeling isolated and lonely at times. A report by the UK’s leading mental health charity for children and young people, YoungMinds found that of a survey of 13-25-year-olds, 67% think that the pandemic will have a long-term negative effect on their mental health. The survey also found that the biggest factors contributing to young people’s poor mental health are loneliness or isolation, and concerns about school, college or university work. 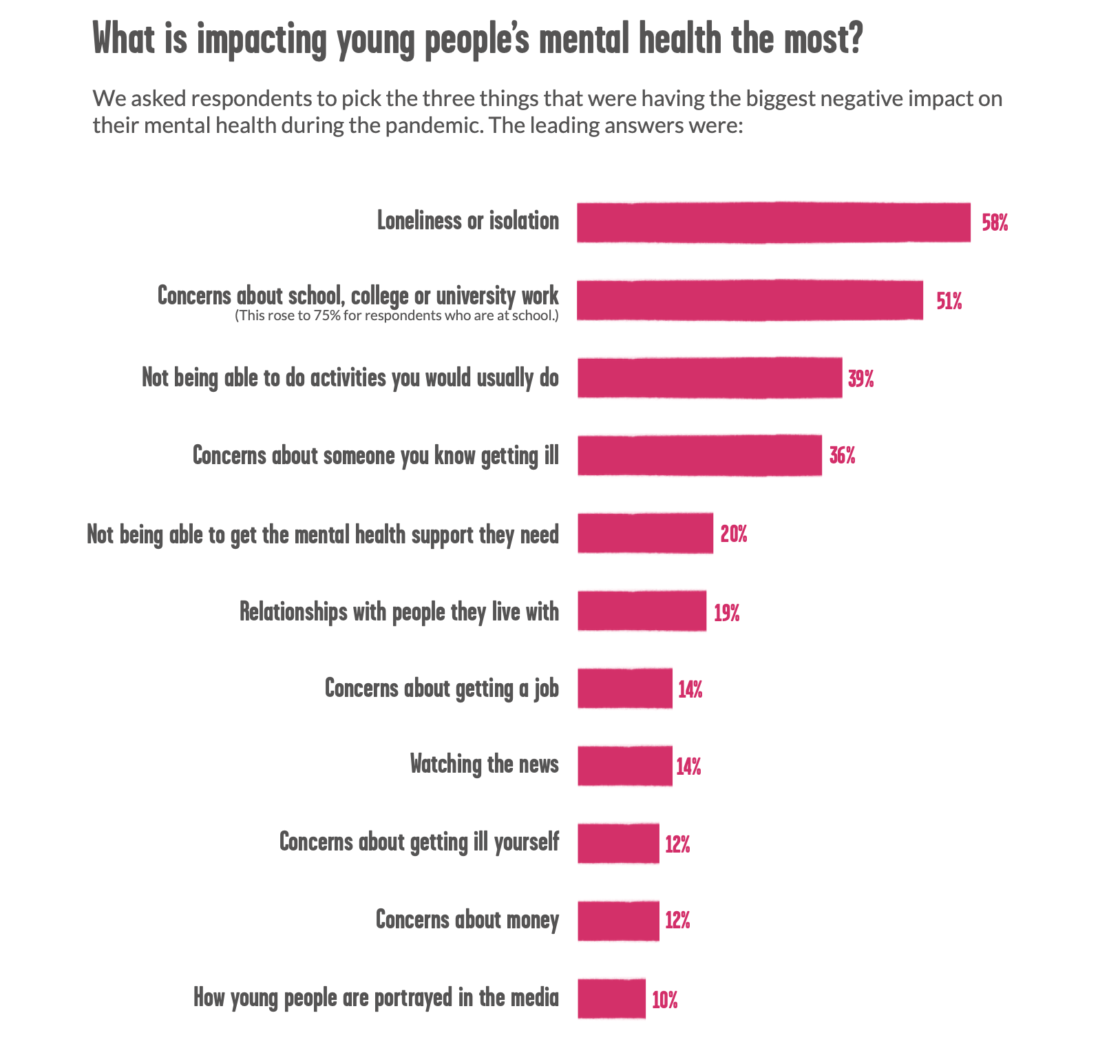 Future job prospects also hang in the balance for so many of us; now would usually be the time in our lives when we’re supposed to embark on one of the most exciting and chaotic chapters. Instead, we’ve been faced with rethinking any plans we once had regarding new jobs, graduate schemes, and whether or not to pursue higher education. For young people like 22-year-old Megan Rowe, the industry she wants to go into has all but disappeared, at least for the time being. “The musical theatre industry has been affected dramatically, and I feel there hasn’t been enough support from the government. It’s affected my career as I haven’t been able to audition or keep up the rigorous training I would normally be doing.”

The Office for National Statistics recently revealed that 88% of job losses since February 2020 consisted of people aged 16 to 34, with 60% of these losses belonging to under 25s. Abigail Taylor, 23, graduated from the University of Stirling last June, then returned to work in August, only to be made redundant shortly afterwards. “It was such a crazy ride between feeling safe in my job, to being on universal credit, and hoping to find a grad job in the middle of a pandemic.”

What’s made matters even worse for young people, has been our depiction in the media and by the government this past year: the reckless, selfish, and careless generation who have no respect for the elderly and vulnerable, and would instead rather go out and do what we want with no fear of consequences. Oh, and we’re also apparently throwing raucous house parties every week with 800+ people. The Health Secretary Matt Hancock has been amongst those blaming young people for an increase in cases.

“Many people have a preconceived notion that students are all ignoring lockdown rules and having house parties – and that isn’t me at all,” says 26-year-old journalism student, Andrea Marie Petrie. In fact, the University College London’s Covid-19 social study revealed that 18-29-year-olds were the most consistent age group when requesting tests if they developed symptoms, and better at self-isolating for the recommended number of days, with only 2% not isolating when told to, compared to 21% of people aged 60 and over. “I feel like we’ve been either blamed for the pandemic or we’ve been completely forgotten. The only people I can think who are to blame are the politicians,” says Abigail.

Not to mention that by June, the earliest possible month the prime minister Boris Johnson has announced that nightlife would return, it would’ve been 15 months since the nightclubs closed. Before the pandemic, nightclubs represented the freedom and release so many young people crave, and benefit from increasing confidence and self-esteem. It cannot be understated how sorely they’ve been missed, as well as the contribution this has also had to mental health. Rachel describes how the lack of social interaction gained from nightlife has affected her, “I’ve noticed my social skills have diminished. I now struggle to socialise even with my housemates and feel anxious anytime I leave the house”.

With cancelled graduations for a second consecutive year, unemployment strife among young people, and mental health all but shattered, we’re so desperately seeking some kind of support or at least recognition for what have been truly testing, and debilitating times for Generation Covid. The government can no longer afford to undermine or ignore the toll this pandemic has taken on young people.