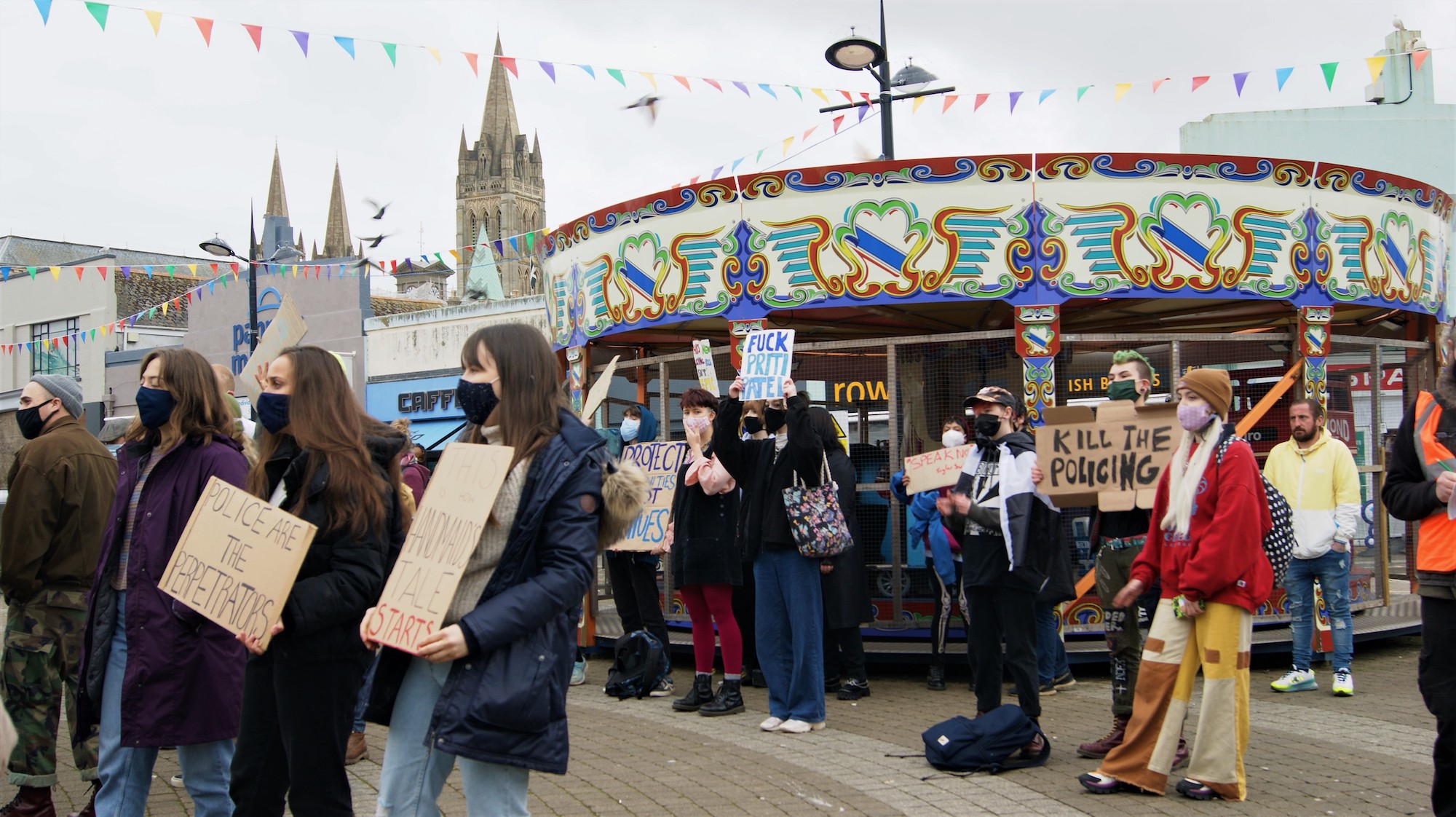 Hundreds gathered in Truro on Saturday to peacefully protest the proposed Policing, Crime, Courts and Sentencing Bill that was pushed through to debate at the beginning of last week. The demonstration, organised by the Cornish faction of Extinction Rebellion, took place on Saturday afternoon at Lemon Quay.

The afternoon was calm, the chanting tuneful. Smiling police quietly charmed the crowds, offering reassurance that the public can trust at least some of the police force. It was only some of the placards invited Priti Patel and the police force, in slightly spicier language, ‘to get stuffed’.

After a year of extraordinary emergency circumstances, that have meant that many of our essential rights have been necessarily taken for the greater good, the public were understandably stricken by the proposal that more of our freedoms would be limited without any clear indication of the benefit to the people only an advantage to the judiciary system they perceive as against them.

It’s also important to mention that however necessary the COVID-19 restrictions have been, that doesn’t excuse the confusing, and clumsy way those restrictions were enacted; many of the regulations being vague and stressful. The public have been expected to comply completely with the troublingly Orwellian new laws, yet high profile politicians seem to find themselves exempt.

Now, more than ever, it is essential for British citizens to be allowed the right to unrestricted peaceful protest to challenge the ethical discrepancies this government has let slide under the guise of necessity. The demonstration in Truro city centre provided a clear indication that, at least in Cornwall, protest can be enacted on a large scale without endangering lives or even violating social distancing regulations.

Sadly, the hard work of Cornish demonstration organisers and protesters has been loudly contradicted by the reckless and dangerous actions of some individuals in Bristol as protests in the city descended into violence leaving 20 police officers injured and thousands of pounds of damage caused including setting fire to a police van.

In Truro, a diverse group, many with recycled placards reading BLM on the reverse, marched a calm circuit through the city beginning and ending at Lemon Quay. Stirring and impassioned speeches impressed upon the crowds the scale of the problem without being crude or aggressive; a young man dressed in Cornish tartan played the bagpipes; and everyone was wearing a mask – unless they were stood away from the throng smoking a roll-up.

One police officer told me that whilst the police fully support the human right to protest, the demonstration did classify, under current stringent lockdown regulations, as an illegal gathering and it’s possible that “action may be taken”. However, the police presence seemed generally unperturbed by the crowd and even seemed to enjoy the afternoon, smilingly pointing out “we are being paid to have a nice walk around town and a listen to some surprisingly tuneful piping”.

You may be thinking that during the earth-shattering experience of a global pandemic there are bigger things to worry about than the right of some radicals to scamper around Truro on a Saturday afternoon, but I can assure you that protest is a vital to our civil liberties.

We are already living in a dystopian nightmare where the whole world lives in fear of viral infection, wouldn’t it be better if we weren’t worrying about our basic human rights on top of that?