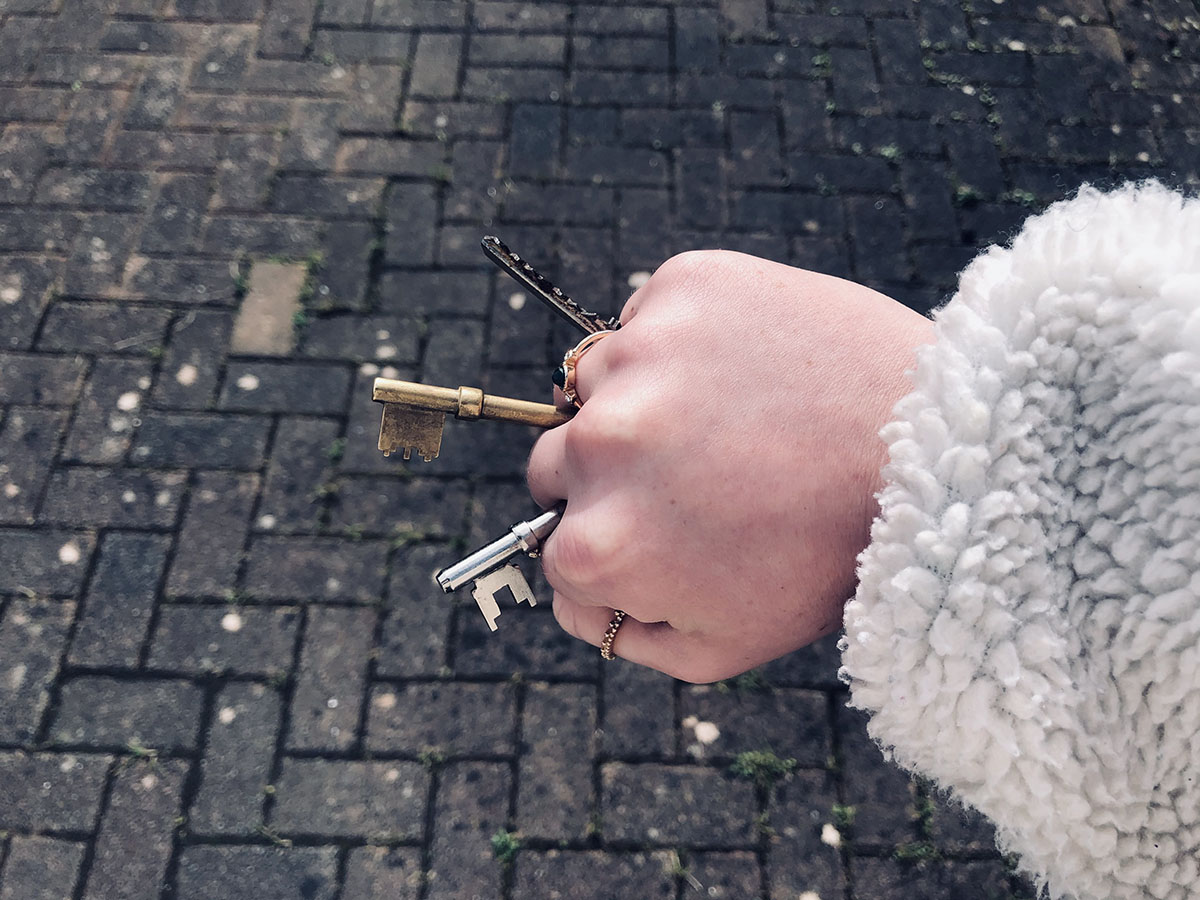 Self-defence: It is common for women to walk home at night with keys inbetween their knuckles  Image credit: Emily Wheeler

Many nights, I have walked home alone. As the sun settles and the grungy illuminations of streetlamps guide me, I clench my keys in my hand, allowing two or maybe three of them to poke out between my knuckles. I keep them steady in my right hand, and in my left, I fiddle with a cigarette. I let the cigarette burn slow, only taking harsh puffs now and then; just so it lasts a little longer. I know that if anyone came near me, I could easily burn or flick it towards them. If it hurts or stuns them at least, I know I have enough time to run.

I turn the volume of my music down, removing one earphone so I have complete awareness of what and who is around me. My phone stays in my front pocket; I tell my friends I’ll text them when I’m home and to stay awake until they are sure I’m safe.

I tell my mum I love her before I leave the house, just in case something was to happen.

This is the reality of what women face. Whether daylight or night-time, we are on constant guard, sceptical of any man who approaches or passes us. Where a man’s catcall or wolf whistle is mindless banter between him and his friends, they are not funny to us. They are crude, invasive and disrespectful. Most importantly, this is sexual harassment.

We shouldn’t have to sit here and write, scream and beg for men to stand with us.

Virtually all young women in the UK have experienced some form of sexual harassment. A survey conducted by UN Women UK,  published by The Guardian, shows that 97% of women aged between 18-24 have all experienced sexual harassment in public spaces. The survey further stated that “96% of respondents did not report the incidents, with 45% saying it would not change anything.”

Claire Barnett, executive director of UN Women UK said, “This is a human rights crisis. It’s just not enough for us to keep saying ‘this is too difficult a problem for us to solve’ – it needs addressing now.

“We are looking at a situation where younger women are constantly modifying their behaviour in an attempt to avoid being objectified or attacked, and older women are reporting serious concerns about personal safety if they ever leave the house in the dark – even during the daytime in winter.”

She states a common trend common amongst women: changing behaviour in order to feel safe. However, this isn’t just happening in our streets or night clubs, but in our schools and workplaces too.

I work in a supermarket on the night shift. I’ve had men follow me around the store and others ask me inappropriate sexual questions or advances, and yet I consider myself the lucky one. My friend, a colleague at the same store, has been sexually assaulted twice. Once by a customer, another by a colleague.

I tell my mum I love her before I leave the house, just in case something was to happen.

We weren’t asking for it. We wear baggy joggers or leggings with big jumpers and fleeces. Our bodies are covered head to toe in fabric that in no way accentuates any part of our figures. So please tell me, if it wasn’t our clothing, what was it?

I have been threatened over and over again for not giving a man something he wanted. What started off as derogatory name-calling became threats. He told me I would be found at my work-place car park and stabbed or that my head would be caved in with a brick. He made one eerie promise to me: a promise that I would be better off killing myself because if he found me, I might as well be dead. These threats were because I refused to send him the nude pictures he wanted, or for not giving him the affection and attention he desired. I did not owe him anything, yet he felt I did.

But on the other hand, I have been sent explicit photos by others without asking and normally without even engaging in conversation on such matters. The unsolicited photos and videos create a wave of uneasiness that crowd my intuition; these are sometimes the only things that make me lost for words. How am I expected to respond? I didn’t want to see what you have decided to show me.

A survey conducted by UN Women UK,  published by The Guardian, shows that 97% of women aged between 18-24 have all experienced sexual harassment in public spaces

I have been grabbed in a night club before, right here in Falmouth. This man couldn’t have been any younger than fifty-five; he was the same height as me, just more built. He was friendly, but I kept a safe distance. He saw how drunk some of my friends were. I could see the thoughts behind those dark, twisted eyes.

Then I became the target. After endless refusals from buying me drinks, he grabbed my neck, jerking my head towards his. He began trailing his filthy lips down my neck before I could yank him off. All the while there were multiple men, including security guards, who stood by and did nothing.

But of course, it was my fault for being out at night, drunk and stupid. So, let me tell you this. I was followed home from a train station in broad daylight. After rejecting a man’s sexual advances over and over again, he proceeded to get on the same train as me, even though we both knew it was not the train he should have been on. As I managed to get away, he said “When I see you again, I’m going to tap that.”

What fault was I at then, for simply trying to get home? It was the middle of the day, I was dressed in baggy jeans and a puffer jacket and taking public transport. Yet I still got followed.

And again, I consider myself lucky. Sarah Everard is a name we should all know. A woman we should all mourn. Walking home from her friend’s house in the evening, she was kidnapped and murdered. The man they charged was a male Met police officer. She should’ve been able to trust him and yet he abused his power to kill an innocent woman.

On social media, she was slammed for walking home at the time she did – it never seems to be the fault of the guilty, but the decisions of the innocent that get reprimanded. 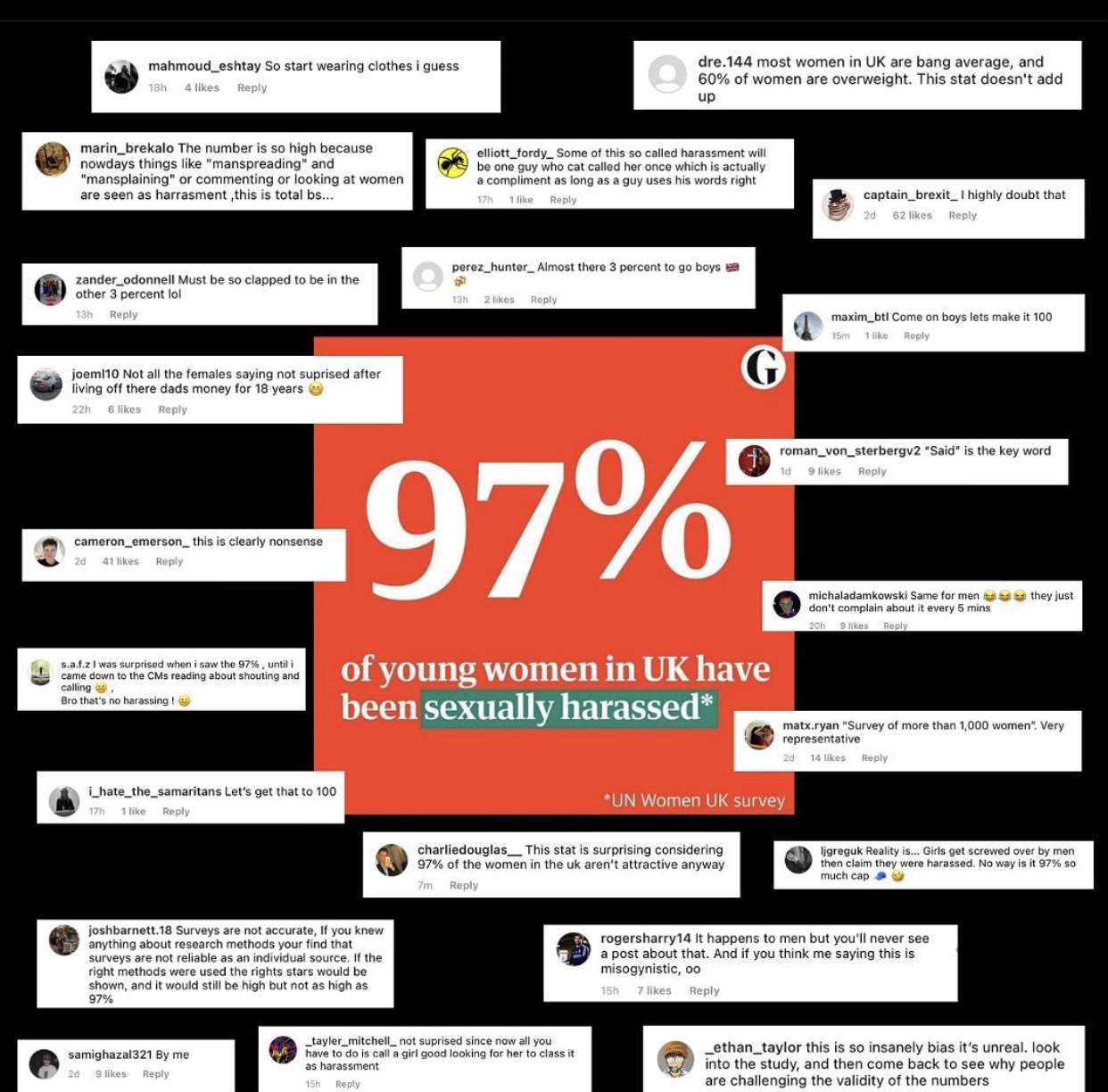 But of course, as soon as you release a statistic conveying the number of women that get sexually harassed, it’s not all men. Online, you spout out comments about how 97% of women are not even attractive enough to be harassed, or as men, you aren’t doing enough because that figure isn’t 100%. Every woman will know one woman, or more likely multiple women who have been sexually harassed – but no man seems to know a rapist or someone who sexually harasses a woman.

Men, this is what you should see in that figure. You should see your mothers, daughters, sisters, aunties and nieces. All women figures in your life who may have been sexually harassed by a man. I’m sure if you witnessed this happen to your family, you would retaliate. So why are you standing by and letting it happen to someone else’s daughter? To their mother or sister?

The rhetoric that it ‘isn’t all men’ is not helpful nor productive. We know it’s not all men, we just don’t know which ones it is. What we do know is that we have to continue to cross over to the other side of the road when there is a group of men or always have our keys in our hands whilst walking home.

I am angry. Women are angry. This is not our problem, yet many of us feel like we are combating this by ourselves. I cannot stop a man from choosing to sexually harass me. What I wear doesn’t matter to men nor does where I am or at what time of day. We shouldn’t have to sit here and write, scream and beg for men to stand with us. We shouldn’t have to be protected; you should be educated. For men to stay silent is to be complicit. The silence does not make a man a good guy and I will not sit here and applaud him because he has not sexually harassed or assaulted a woman. Because you see, I will not applaud someone who fails my safety and the safety of other women.

My friend just wanted to work.

I just wanted to have a few drinks on a night out.