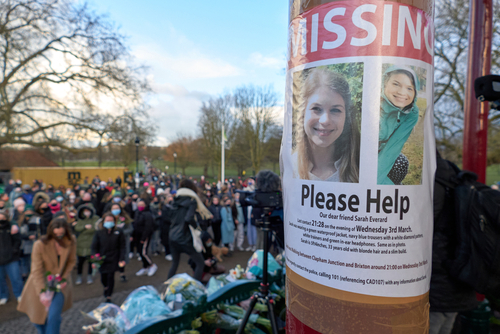 Sarah Everard. Killed by the person whose job it is to protect her the most.

When the news broke last week that a woman had gone missing walking home in the dark, my heart sank a little, as every woman knows that this is their worst fear. Sarah Everard did all the things she was supposed to do, she called her boyfriend to let him know she was on her way, she wore sensible shoes, she walked a well-lit path home, but it still wasn’t enough.

Sarah Everard’s disappearance bought a lot of feelings to light last week when women all over the country started sharing their experiences about being afraid of walking home alone. The nervous feeling of a presence behind you is real, and it needs to be addressed. The argument that women need to sacrifice things, like walking home alone, and not that men need to change to end this violence is absurd.

A group ‘Reclaim These Streets’ who have been protesting for women’s rights since 1995, held a vigil last week, demanding safer streets for women.

Sarah Everard’s murder brought attention to a problem that has around for decades. The narrative that ‘you shouldn’t let your daughter walk home alone at night because something bad could happen to her’, why aren’t we putting more pressure on educating men that violence against women isn’t acceptable. Longer prison sentences are needed, as sexual assault carries a maximum charge of 10 years, but it causes a lifetime of effects on its victims.

Wayne Couzens, a serving Met Police Officer, was arrested for her murder last week. We are repeatedly told growing up that police officers are there to protect us and to keep us safe from bad people. He was the bad person. The outrage around this case feels different than any other. Every woman can see themself in this situation. Women everywhere are realising they too have been a victim of some sort of violence from men, or even that they are changing their habits instinctively, with the news that 97% of women have experienced some form of sexual harassment. A shockingly high number and something needs to be done.

Jenny Jones, a baroness and Green Party peer, suggested in the House of Lords last week that there should be a 6 p.m. curfew for men in the wake of Miss Everard’s disappearance. She later told Sky News ‘that it was not an entirely serious suggestion, nobody makes a fuss when, for example, the police suggest women stay home. But when I suggest it, men are up in arms.’ The Met Police didn’t help, when the vigil was held in London there were pictures of them slamming women down, yet again more violence against women.

Sarah Everard’s murder was tragic and shouldn’t have happened, and women must keep pushing for more justice and safety so they can be free to walk the streets without fear.