British regional airline Flybe went into administration on Thursday morning, after all of its flights were grounded on Wednesday night, leaving thousands of passengers stranded across the UK.

Cornish travellers are some of the worst affected, as Newquay airport was mainly operated by Flybe: “We are saddened by the news that Flybe has ceased trading. We can confirm that all Flybe flights to and from Cornwall Airport Newquay are cancelled with immediate effect, this includes flights operated by Stobart Air.”

“We can confirm that all Flybe flights to and from Cornwall Airport Newquay are cancelled with immediate effect.”

Passengers are advised not to travel to Newquay but instead visit: www.caa.co.uk/news and Twitter: @UK_CAA for advice and information and to make alternative travel arrangements, with EasyJet, British Airways and Ryanair offering special fares.

The Airport has already secured an alternative operator for the flight between Edinburgh and Newquay, starting in June 2020 with an existing partner, Loganair.

Richard Thomasson, Interim Airport Director, expressed hope for the Cornish airport: “We’re delighted that we have been able to secure Edinburgh so quickly and are confident that other routes will follow in the near future.”

The government subsidised route to London appears to be a major attraction for other airlines, according to Cllr. Monk, who said: “any airline interested in expanding will be rushing to take on that.”

However, it is not clear when the subsidised route will be re-launched, with coronavirus spreading fear in the aviation business.

“Moving forwards, we now need to ensure we can continue to serve Cornwall and we are working hard to restore our route network with other airline operators.” – Richard Thomasson

Flybe has been facing financial difficulties since 2018, when its shares fell drastically; last year the company was bought by a consortium, which includes Virgin Atlantic, and was narrowly saved in January 2020.

However, on the 5th of March, Flybe announced it is going into administration and ceased operating with immediate effect. 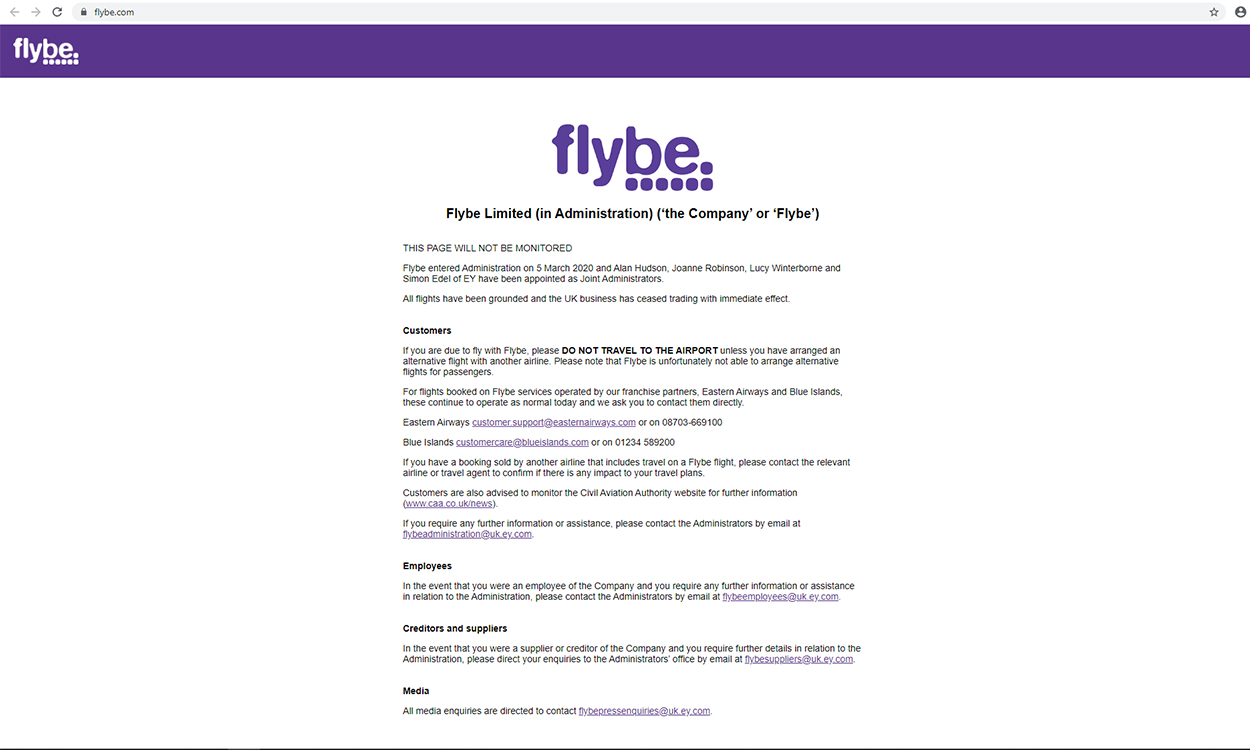 Flybe’s website states: “All flights have been grounded and the UK business has ceased trading with immediate effect.”

Richard Moriarty, Chief Executive at the UK Civil Aviation Authority, said: “This is a sad day for UK aviation and we know that Flybe’s decision to stop trading will be very distressing for all of its employees and customers.”

The Exeter-based company is the first ‘business victim’ of coronavirus; experts have warned that Flybe might be the first of many to stop trading as airlines started introducing cost-cutting measures.

Infographics made by Karolina Bohacova