Leap Day: Why the proposal tradition is a patriarchal trend

There are many concepts that, as a woman, are at the forefront of my ‘down with the patriarchy’ state of mind.

Daily struggles such as sexual objectification, the gender pay gap, even the tampon tax; these are all things that feminist groups are fighting to change for good- with some degree of success. Two sisters have started a campaign to make street harassment illegal, research into the pay gap is being published, and Scotland is the first country to make sanitary products free.

But something else, admittedly trivial, has been bothering me. On February 29th this year, those born on leap day have just celebrated their birthdays- and thousands of women have just proposed to their male partners.

Hang on, do women still celebrate that?

The tradition began sixteen centuries ago in Ireland, when St Brigid of Kildare complained about how long women had to wait for men to propose. Therefore, St Patrick apparently said, and I’m paraphrasing: “alright then, women can propose on this one day every four years, and if the man says no, he has to buy you a pair of gloves.”

Cheers. I needed a new pair.

In the 5th Century, this must have been a pretty big step for Irish women. However, I would like to point out that women were also tortured in the 5th Century for adultery, self-abortion and facilitating a miscarriage in ways I don’t even want to explain. I would also like to remind you that, in the 21st Century, women are allowed to propose whenever they please.

So, why are we still proposing on Leap Day?

Kat Williams, editor of Rock N’ Roll Bride magazine, has labelled the tradition ‘low key aspirational feminism,’ and I totally agree. On any other day, proposing as a woman is a big middle finger up to the patriarchy, but proposing on leap day is different. Sixteen centuries ago, a patriarchal system decreed that women were only allowed to propose when they said so, once every four years. And we still do it? Come on ladies. 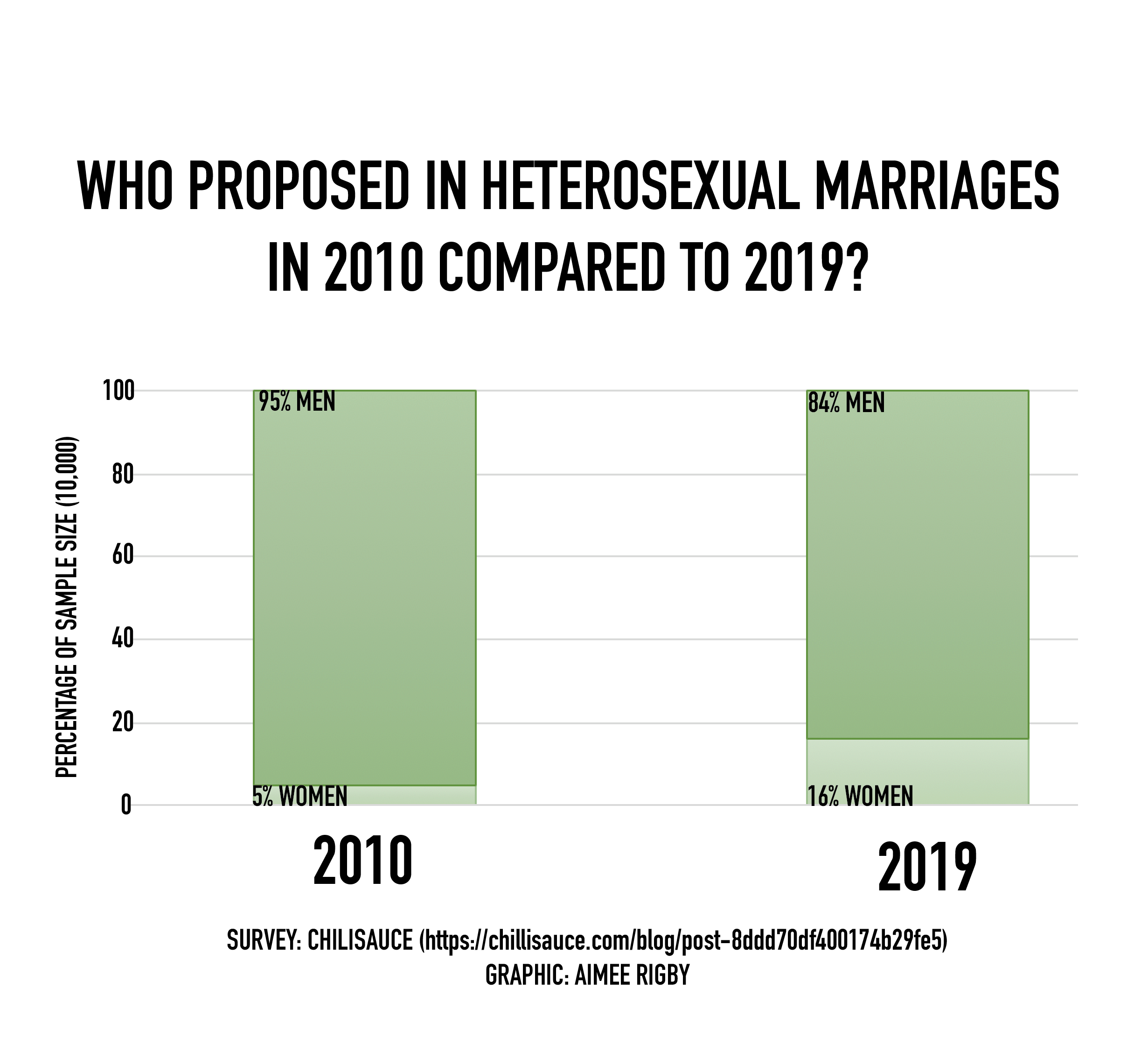 In 2010, a survey of 10,000 showed that only 5% of women in heterosexual marriages proposed. Nine years later, this figure increased to 16%.

Nine years prior to 2010, Cornish woman Sarah Forbes, 54, from Penzance, proposed to her husband, Jim. Forbes said: “We have been married for 19 years after I proposed. I wouldn’t consciously propose on leap day. It’s sexist, because it indicates we can’t ask the rest of the time.”

Sarah is one of 57% of women who state that they would propose. Although this seems like a good proportion, 76% of men believe women should be the ones getting down on one knee. 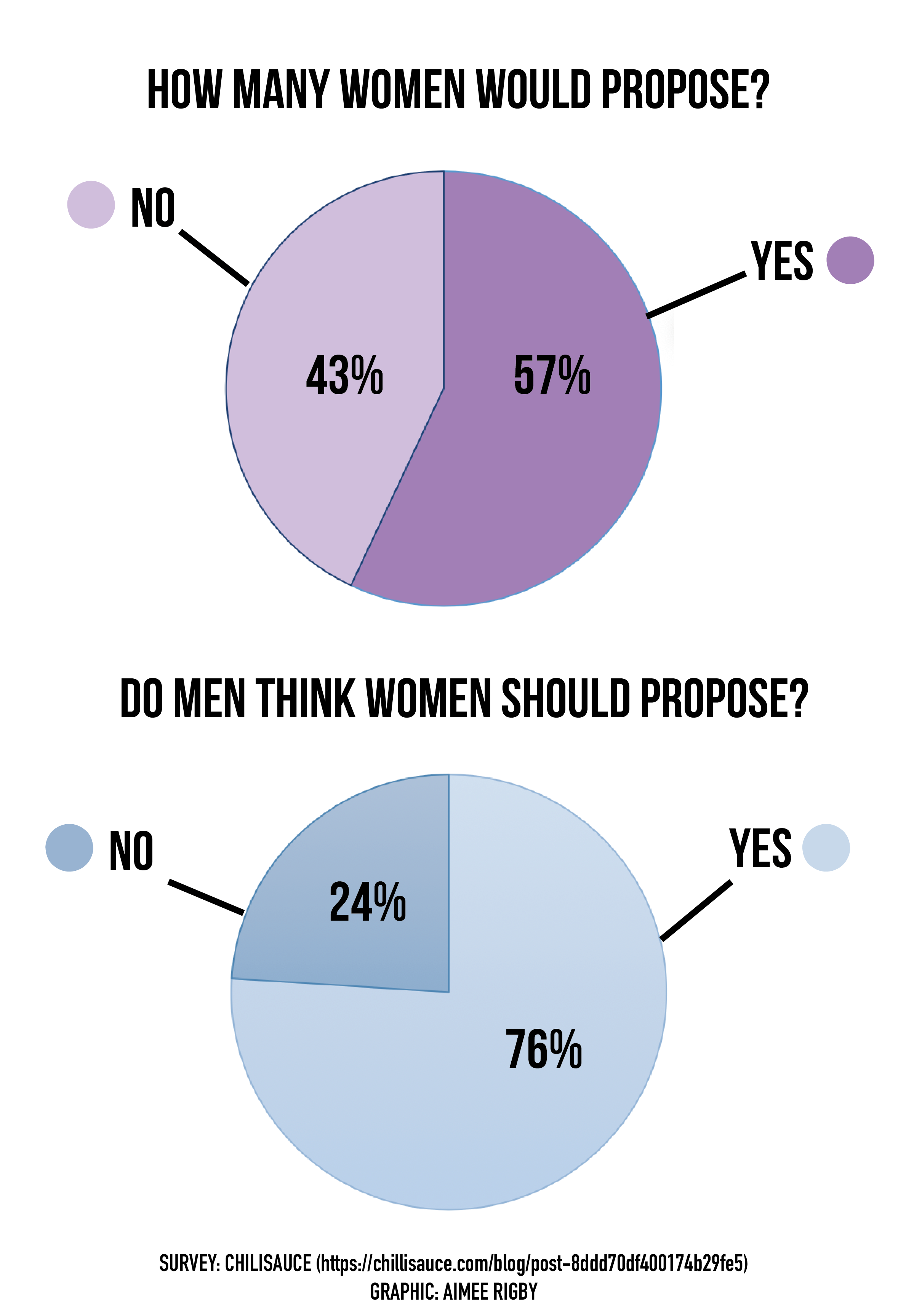 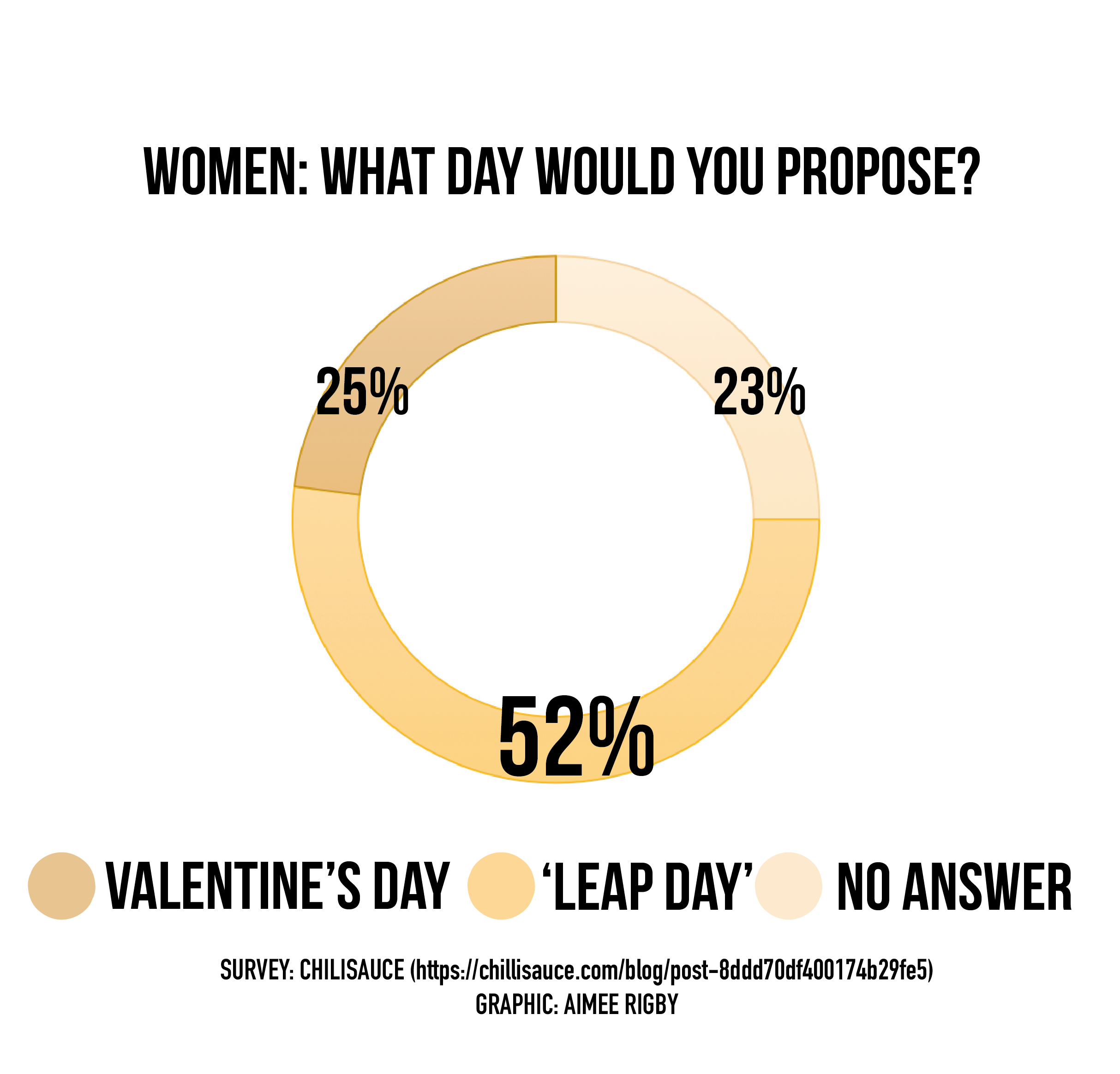 Leap day proposals are not the only component of the wedding industry that are inherently sexist. You’ve got the father ‘giving away’ his daughter, women taking their husband’s last name, and asking her father’s permission to marry.

The following data shows how many men would ask their bride’s father for permission to marry their daughter. 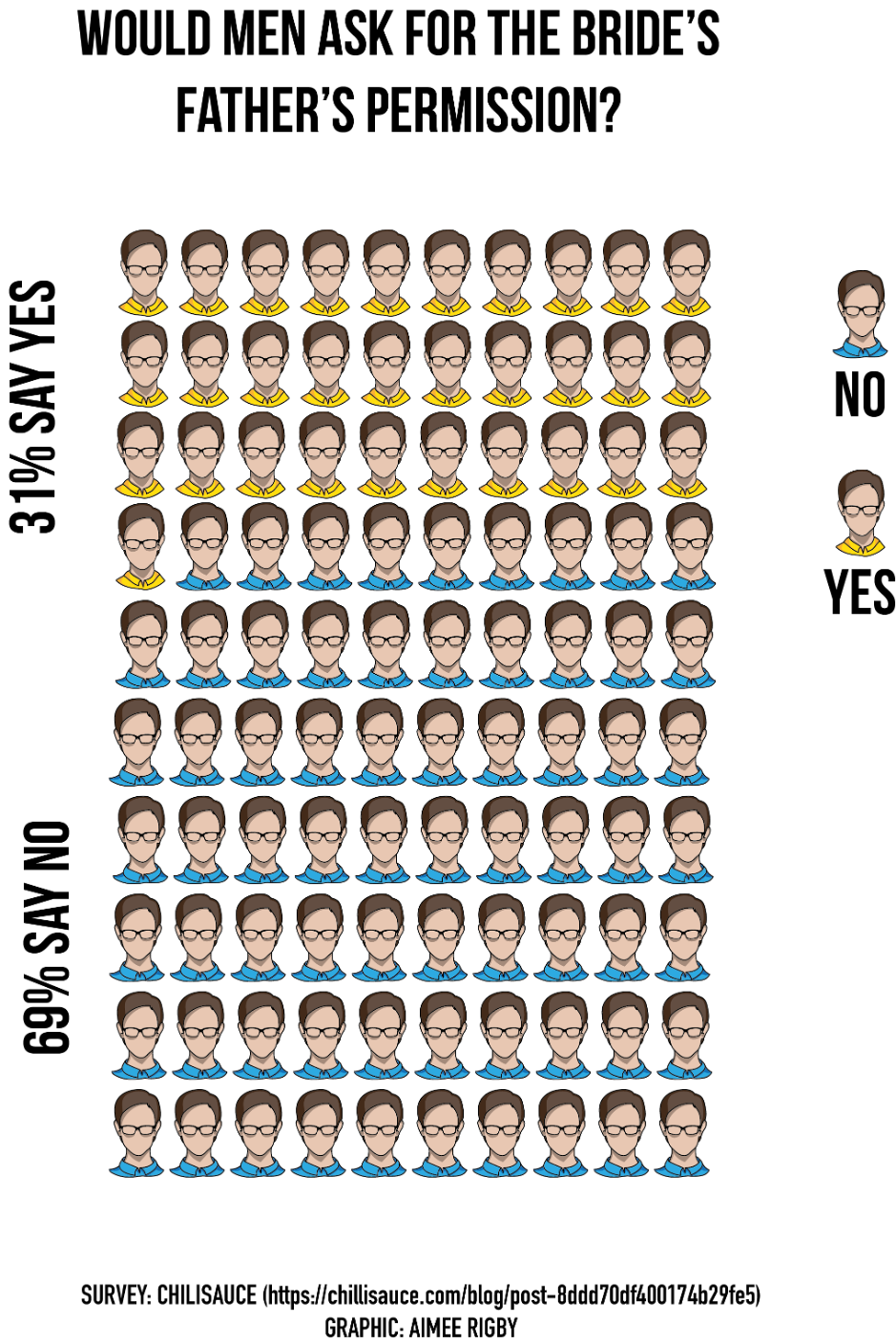 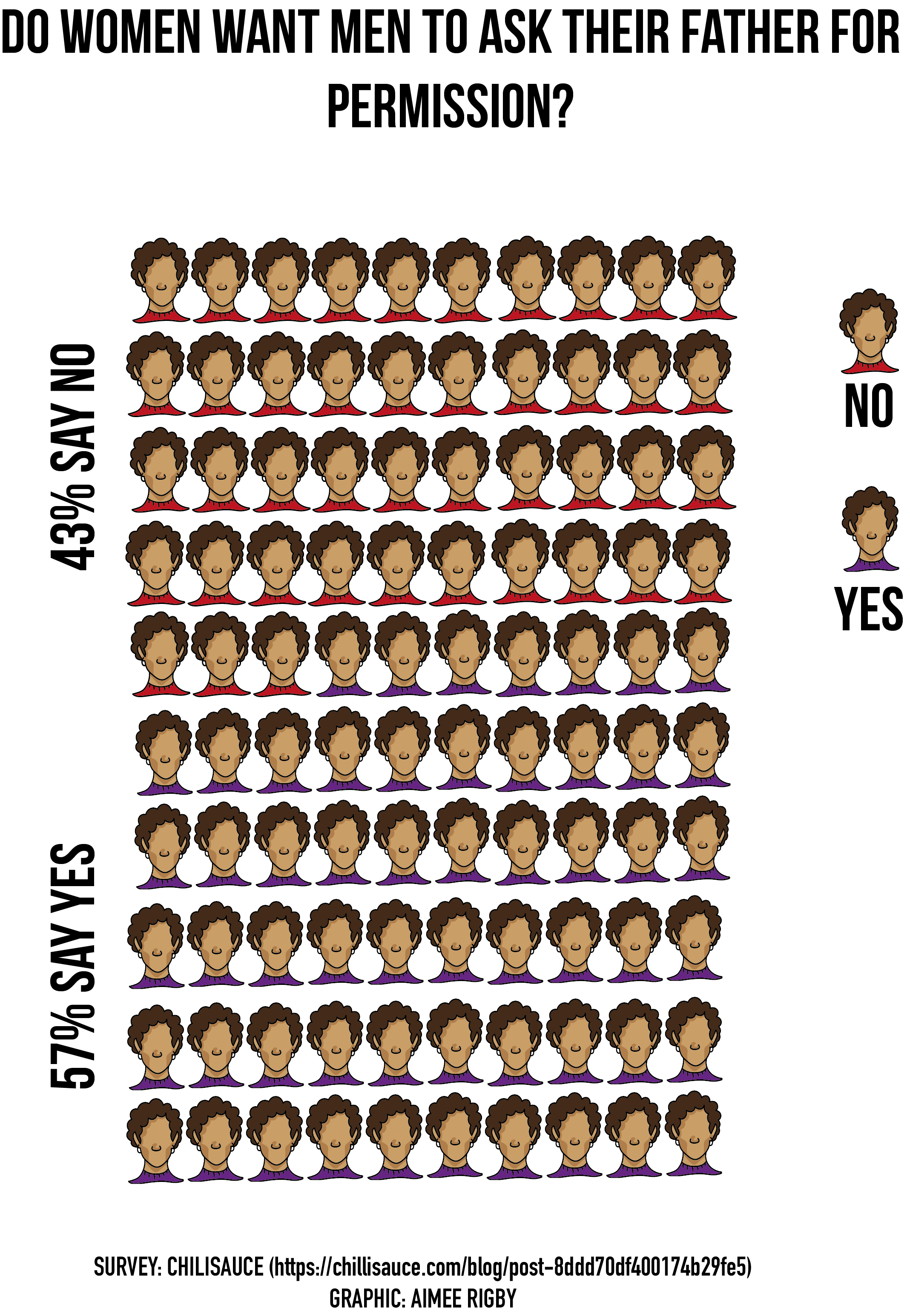 Tradition is tradition- that is understandable. But that doesn’t mean that tradition isn’t sexist. The more women become aware of the history behind the traditions we jump on board with, the more we can begin to unravel ourselves from the oppression women experienced centuries before us.

So, if you’ve been waiting for your partner to propose, now is the time to take matters into your own hands.

Leap day has passed, and you have 365 other days to choose from.