Is the UK losing its marbles?

The Elgin marbles have been a part of the British museum’s collection ever since they were brought back from Greece in 1801. Now, with Brexit underway, Greece seeks to reclaim ownership of their sculptures and heritage – raising the question: Will the UK lose its marbles?

Greece has been a popular tourist destination since the early 1700s. It has numerous archaeological sites that stand as a testament to its rich history. These range from the Acropolis to thermal springs, among many others. These sites have created a mesmerizing landscape, which tourists have been attracted to for centuries. In its earlier stages, these sites were comparable to souvenir shops, with the precariousness of the locations making it easier for interested visitors to take pieces back with them.

Standing atop the Acropolis lies one of the most treasured monuments of Greek history, The Parthenon. It is a temple dedicated to the goddess of wisdom, Athena. Some of its sculptures were taken in 1801 by British Lord Thomas Bruce. These have since been in the UK’s possession, and have come to be known as the Elgin Marbles. 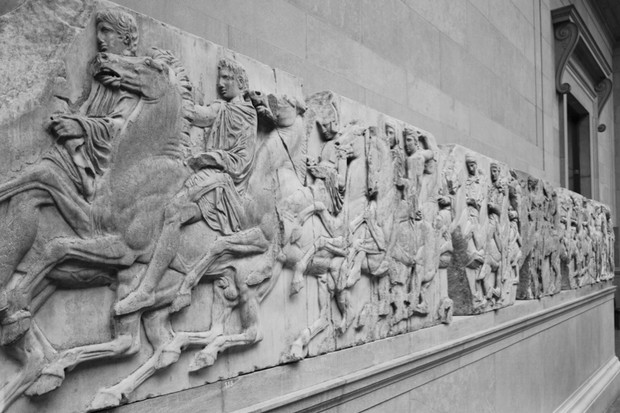 The Elgin marbles , a part of the British Museum’s collection

Even if they were legally taken, it is up to debate whether or not it is morally right to possess the marbles, an iconic part of Greek history.

“For me, the Parthenon Sculptures raise some of the biggest questions of cultural property, ownership and where works of art ‘belong’” – Mary Beard, Cambridge University.

Over two centuries later this topic is brought up again, as the EU is asking for the marbles to be returned to Greece as part of the Brexit deal. This is not the first time this was requested, however, and the appeal has been denied again. They were bought for £350,000 in 1816 and have since stayed in the British museum.

Contextually however, the marbles were removed by Lord Elgin because he had an interest in art and protecting the Greek sculptures, as they were being pillaged and destroyed regularly. By the time he got approval to take them back to England, over 40% of the Acropolis’ artifacts were gone.

You could say that these sculptures were taken in order to keep them safe from “ignorant contempt and brutal violence”, and that they reach a much broader audience where they are right now. With that being said however, it might be time to return what is a massive part of Greece’s history, to Greece.