Cornwall comes together to help victims of hate crime

In the run-up to Brexit Day, a Romanian couple in Helston was repeatedly targeted with hate crime.

Mirabela and Dragos Robatzchi, who are the owners of the taxi service, Hellis Cab Agency, had their business targeted for three consecutive days.

Mrs Robatzchi said: “Two nights before Brexit someone punctured our tyres. The previous night we had found dog poo left in our parking lot in the middle of it. It makes you wonder.” 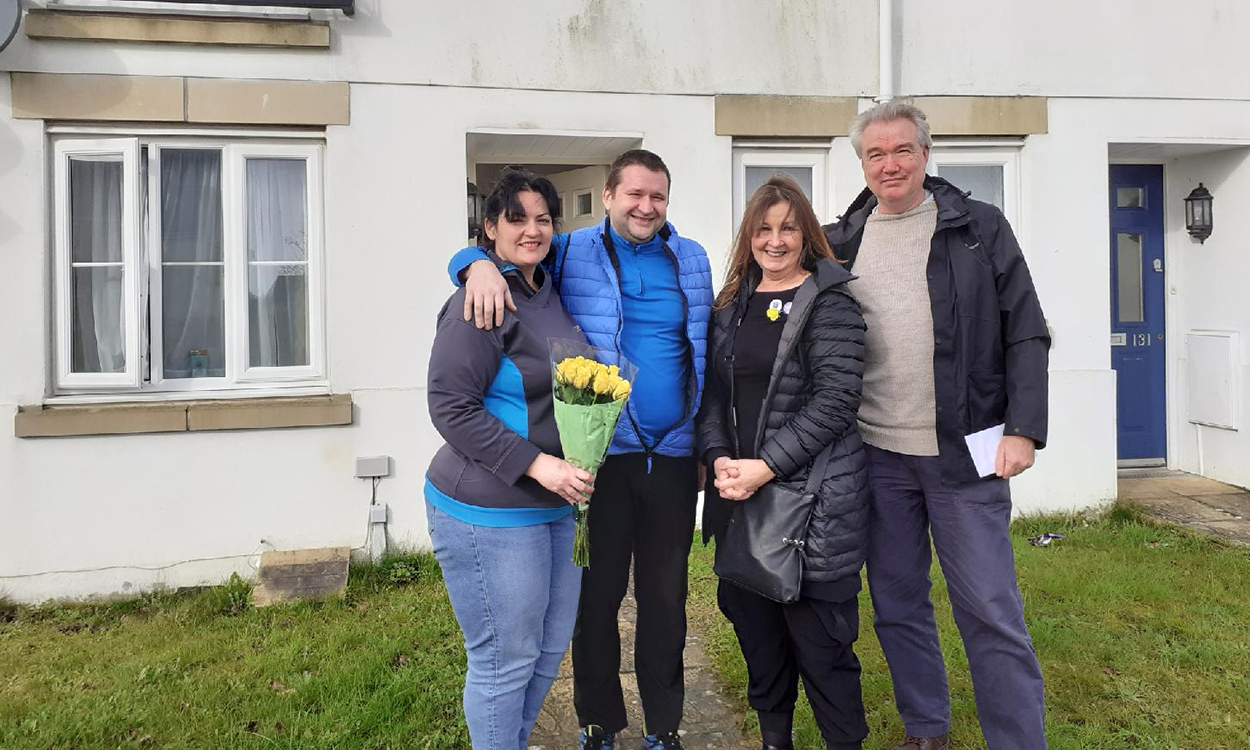 Dragos and Mirabela Robatzchi with Cornwall for Europe’s Angeline Henderson and Tom Scott.

The family originally thought it was an accident or tactics by their competition, but later they realised it was done on purpose with an intention to harass and intimidate their business due to their nationality.

The Romanian taxi owner stated someone “probably felt more confident in doing it”, as the country was preparing to leave the EU on the 31st of January.

Other taxi services called the couple to show their support by providing vehicles to their dispatch so the Hellis Cab Agency would not lose its contracts, including transporting local disabled children to school.

The incidents were reported to the police, who claimed they “don’t have enough evidence,” according to Mrs Robatzchi; a further investigation is taking place.

“What Dragos and Mirabela have experienced is not an isolated case.”

Cornwall for Europe, a pro-remain group, decided to step in and support the Romanian family with a Crowdfunder project to raise money to pay for the damage on the car.

The fundraiser has been a success: it met its target within the first 24 hours and is still open for donations – currently, the project has raised nearly £1,000.

Cornwall for Europe said they would use any additional funds to help other EU citizens who had been targeted by xenophobic hate crimes in Cornwall.

Emmanuelle Brook, Chair of Cornwall for Europe, said they wanted to show EU nationals they were valued and supported: “Many people from EU countries are feeling very anxious about their future in the UK right now, despite having spent years of their lives here and contributing in all sorts of ways to their local communities – as neighbours, co-workers and friends.

“We know that it’s only a tiny minority of people who commit such hate crimes, perhaps encouraged by some of the shameful anti-European rhetoric from some politicians and elements of the media that we’ve seen in the last few years, but unfortunately, we also know that what Dragos and Mirabela have experienced is not an isolated case, and that others have also been targeted in this way.”

“Usually it was among young people, which is quite extraordinary.”

Mrs Robatzchi also confirmed her case is not rare for Eastern Europeans: “Other Romanians were sending us messages about other incidents which happened to them, but they were afraid to speak up.”

“Most of it was about children being bullied at school because of their ethnicity, because they are not British,” she added, claiming most of the incidents happened in Camborne.

She hopes her public case will inspire others to reach out to the authorities to report the incidents: “People need to be a little bit more aware that they will receive support of the authorities. They need to speak up!

“Originally, we were really stressed. When you see there’s more good than evil you feel happy again. You can rely on people and that’s the main thing.

“If you don’t take any action, no one will know, and you can’t prevent it from happening again.”

Yellow Rose, an initiative created by Cornwall for Europe member Jane Stevenson in 2018, brought yellow roses to the family as a symbol of friendship.

Mrs Stevenson said her group encourages people to send messages of friendship to EU citizens in the UK and British people living in Europe:  “It’s a simple way of showing that you care and it’s led to thousands of people sending heartfelt messages with this symbol online as well as giving actual roses to friends, neighbours, colleagues and even complete strangers.”

Yellow Rose is looking to help more victims of hate crimes in Cornwall.

Watch Tom Scott, from Cornwall for Europe, explaining more about the initiative: