Cornwall Air Ambulance has reached its £2.5m target to fund a new life-saving helicopter for Cornwall. 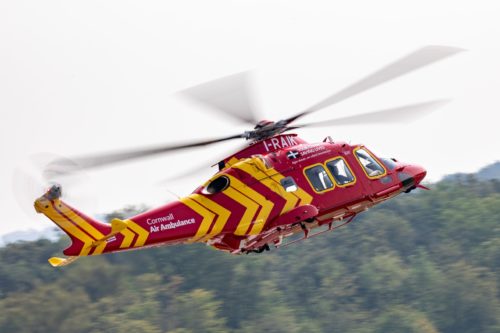 Since launching in April 2018, the New Heli Appeal has seen donations flood in. Supporters up and down the county have crowd-funded, organised events and taken on challenges all in the name of the Cornwall Air Ambulance Trust.

With the target met and 47 days of the appeal yet to come, prospects for the Newquay based charity are looking promising.

“The New Heli Appeal has been a tremendous journey for everyone who cherishes Cornwall Air Ambulance and we have been overwhelmed by the support received from the public. A combination of hard work, dedication and incredible teamwork has meant we have surpassed our target before the end of the fundraising appeal.”

The new helicopter will allow the Cornwall Air Ambulance crew to reach more victims and save more lives. The AW169 is faster, more powerful and has double the fuel range of their current aircraft. This welcomed new asset has better technology and will mean the crew can carry more medical equipment, turning the helicopter into a mobile emergency department. This will be the first aircraft that the charity owns, having leased their vehicles in the past.

“We are delighted to say that we will be the proud owners of a helicopter – that is a first for this charity.”

“It is a fantastic aircraft, full of new technology, but it is what that helicopter will allow our clinical team to do that really counts – and that is saving more lives in Cornwall and the Isles of Scilly.” Paula Martin, Chief Executive of Cornwall Air Ambulance says.

One of the fundraising events being held in support of this cause is a Rugby Ramble. Cornwall Air Ambulance have partnered with the Cornish Pirates and St Austell Brewery to organise the event, being held on March 1st.

Visit https://cornwallairambulancetrust.org/rugby-ramble/ to find out more.