Cornwall’s spaceport – A wise use of money?

Cornwall Council convened last Tuesday for a key vote on the building of a Spaceport in Newquay. With a vote of 66-34, Council members agreed to allocate an additional £10m in funds, bringing the total up to £12m.

The Spaceport came as the result of the collaboration between Cornwall and Virgin Orbit to offer the UK a number of benefits including: the longest runway in the UK(2,744m), uncongested airspace, connectivity across all of the UK & a horizontal launching site for rockets/spaceships. In addition to that, the spaceport boasts the ability to create 150 immediate jobs, with 80 of them going directly to locals.

However this process is not without its problems, as the council’s latest vote did not fail to gather attention from locals and extinction rebellion (XR), who argue that this project is a hefty price to pay for what it is. The council declared a climate emergency on the 22nd January, with plans of having Cornwall become carbon neutral by 2030, and that is seen as abandoning that initial plan to some, such as the extinction rebellion members, who spent most of Tuesday outside dressed up in their deathly-looking bright red outfits and white penitent robes. They held up signs, explaining their problem with the spaceport in simple messages:

“Gave them jobs but no future” “Vanity thrashed the biosphere” “Caution! Climate breakdown ahead”. 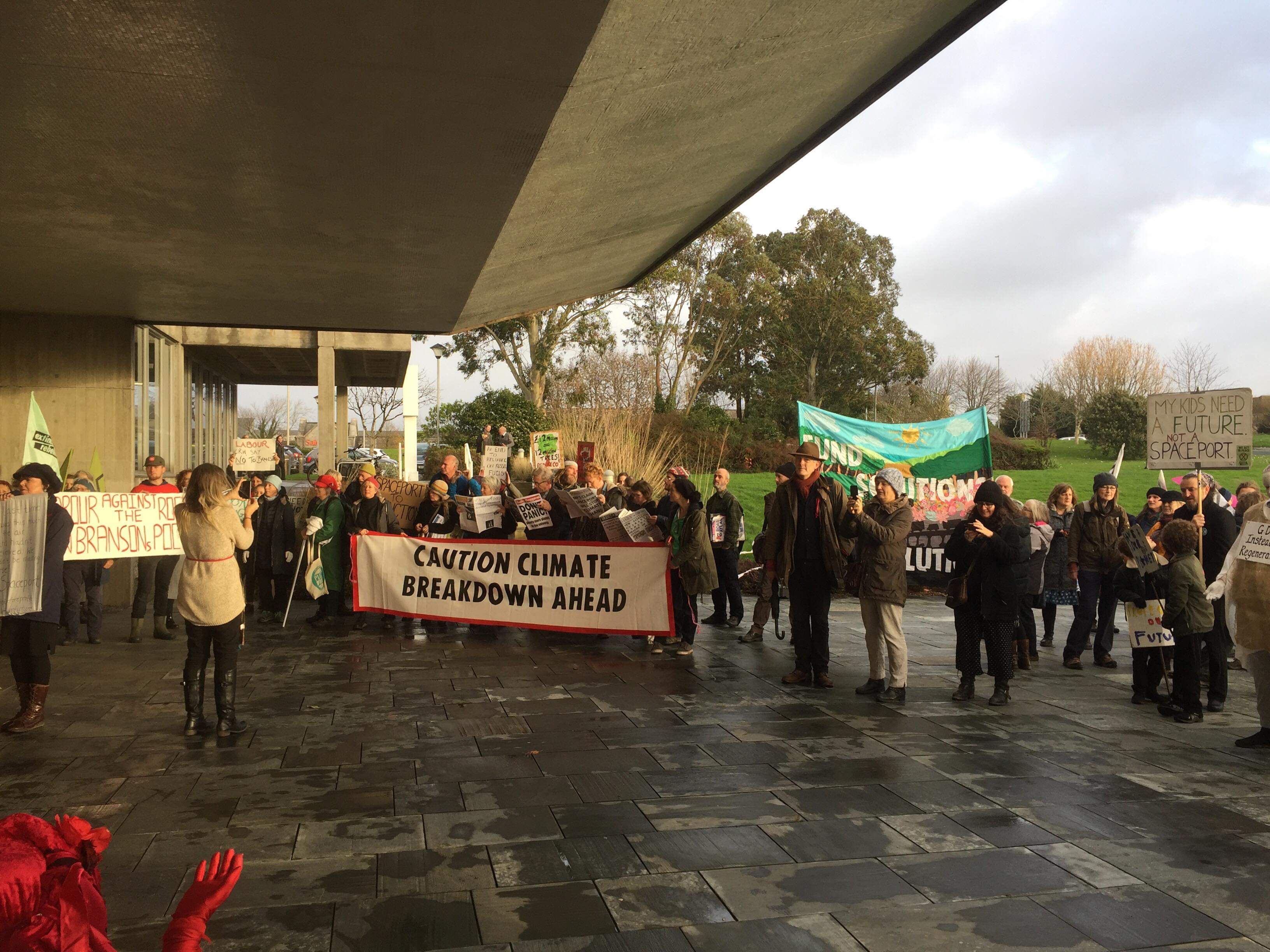 Regardless, the Spaceport, has chosen to focus on ensuring that their project does not “use exotic fuels”, as well as stating that:

“The Spaceport project is the first Cornwall Council project to undertake an independent carbon emissions report. We have used industry recognised fuel data, independent world renowned climate change academics, and asked them to add generous multipliers to build in contingency for any uncertainties.”

This only seems to address part of the problems that some locals and XR members have however, as part of the worry is that attention is shifting away from fixing climate change, and focusing on space instead. Protesters feel that there is a mix up in priorities from the Cornwall council. Caitlin Richards attended the meeting this Tuesday to speak to some of these unhappy XR members:

“I think a lot of the Councillors have been sold a story of high-tech jobs ad high-tech industries… but those jobs can be found within sustainable development of Cornwall and low carbon economy. Those jobs will be there and can be there so the money should be focused on that rather than Richard Branson’s spaceport.” ‘Mike’ (Extinction Rebellion)

And so the question that this all boils down to is: Is this the best investment that can be made for Cornwall? 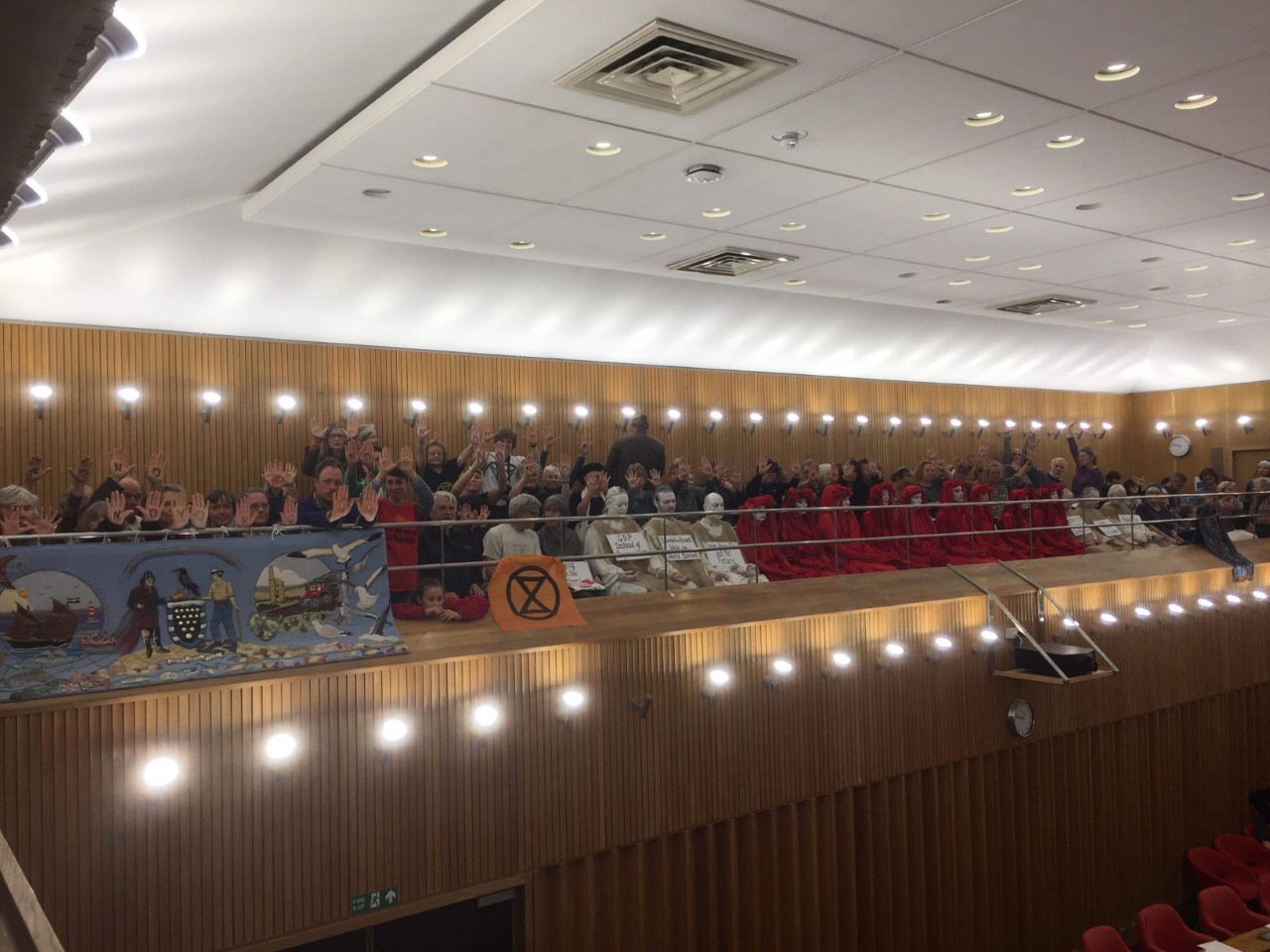 With brexit still being uncertain, £12m in funding is a lot for a project that might not yield profit, especially since climate change is the dominant form of discourse at the moment. According to the spaceport report, at worse, it will add 0.1% of Cornwall’s carbon emissions, and while it isn’t really making the situation much worse, it is not improving it either.

“We need better infrastructure for transport, for housing… We have the largest, I think 30% of our children are in poverty, there’s SO much more we could do with £12m than give it to supporting Richard Branson”

And so, it seems that to the protesters and locals, the money should be spent on honoring the council’s climate change resolutions, as well as working to fix some of Cornwall’s issues, such as decreasing its poverty and homelessness rates for instance.

“We want Cornwall to reap the benefits of the rapid growth of the international space sector.[…]”

On the other hand, Adam Paynter, the leader of the Cornwall council seems to praise this project, especially in the UK’s currently uncertain economy:

“We want Cornwall to reap the benefits of the rapid growth of the international space sector. With assets like Cornwall Airport Newquay, Goonhilly Earth Station and a strong South West Aerospace supply chain, the global space industry is a huge opportunity for our region and a key part of our New Frontiers post-Brexit economic plan.”

If there is anything that is certain right now, it is that this spaceport really is a cause for controversy and debate: Will Cornwall go to space in an eco-friendly and profitable way? Or will this Spaceport prove extinction rebellion right?

Newquay’s spaceport is due to be finished by 2021, find out more on their website here: