A local’s guide to the best pizza in New York

If you think of some quintessentially New York foods, the first that comes into my mind is pizza. Grabbing a slice was something I was very excited to experience in the Big Apple, not least because I am a self-confessed pizza fiend back in the UK. However, I did not want my deciding hand to land on some subpar pie; I wanted only the best. On a chilly but sunny morning strolling through Central Park, I decided to ask some locals about their favourite pizza spot and give five of them a try in one day.

My pizza pilgrimage began with a widely recommended choice. John’s was praised by Tom from the East Village, Dan from the Upper West Side and from Matt from Brooklyn.

The place was one of the most intricately decorated spots I went to. Its walls were lined with murals and there were sketchily etched carvings into the wooden furniture. Its atmosphere was cosy yet vibrant. As soon as you entered, you could instantly realise why this place was a favourite of so many. 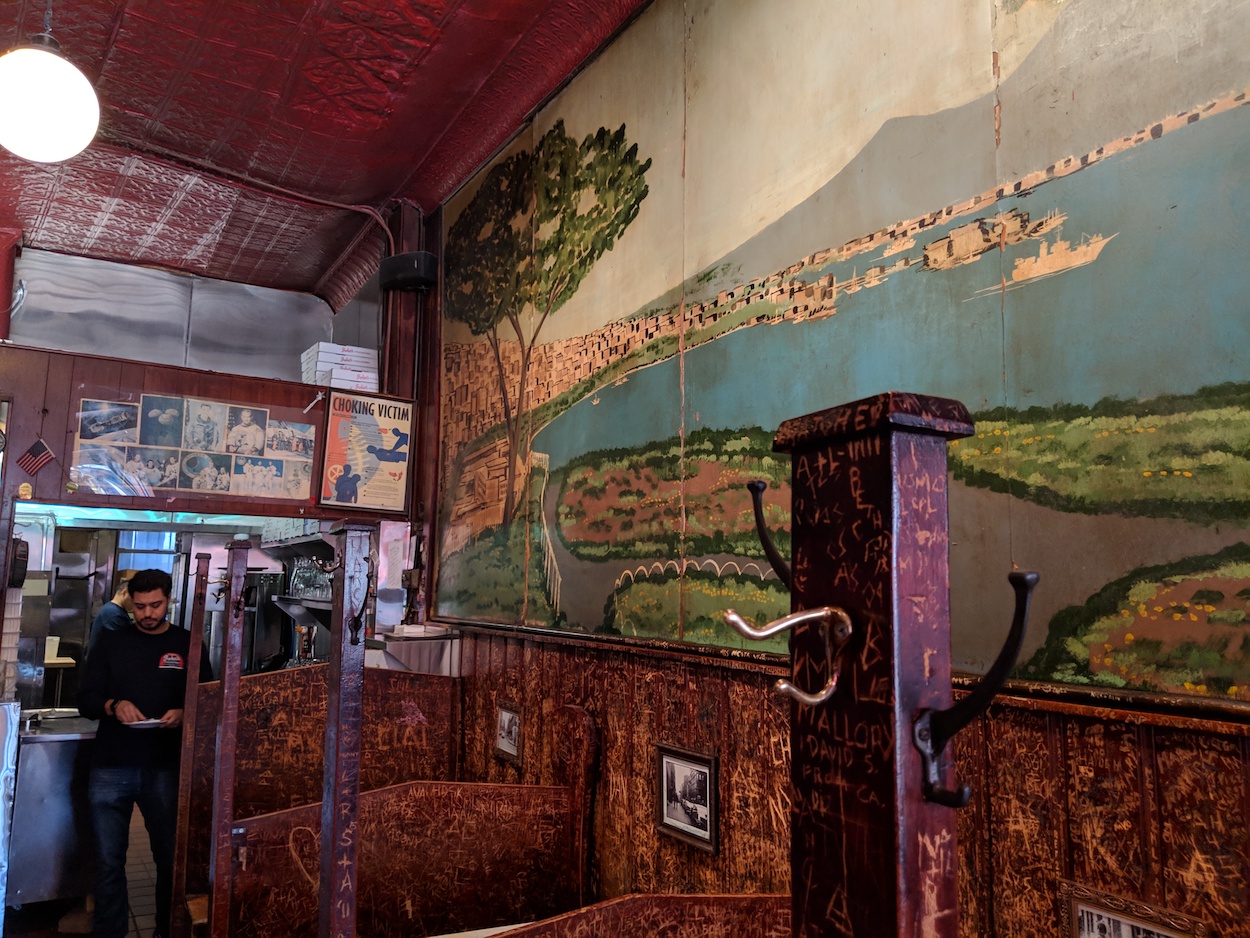 The beautiful interior of John’s Pizza 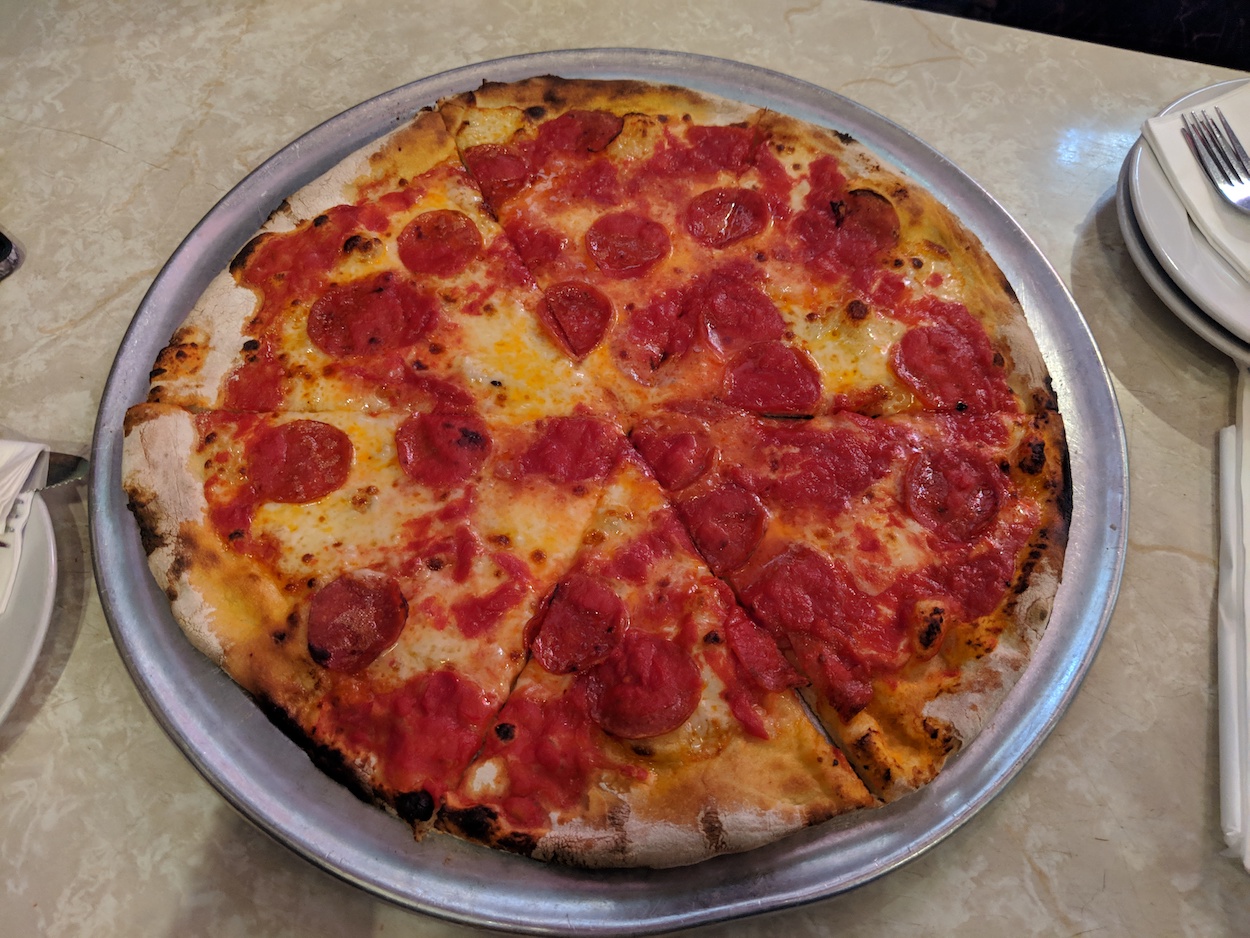 The first pie of the day

You could only order full pizzas at this spot, so the first of the day was a medium pizza. Despite the name, it was humungous (a trend that would continue throughout my tasting escapades). The sauce was aromatic, the cheese was ultra stringy and there was just the right level of grease. Needless to say, the next four pizzas had a lot to live up to.

A particularly exciting suggestion came not from a local, but an Italian tourist. David insisted that despite just visiting, he “knows [his] pizza”. He pointed us in the direction of Don Antonio, which apparently had the best in the city: Italian confirmed.

Don Antonio’s had a completely different feel to John’s. A more upmarket establishment, this was a proper sit down restaurant, bustling with life inside its seemingly quiet and small exterior. For a much less intricate take on it, it felt like a fancier version of a Pizza Express. 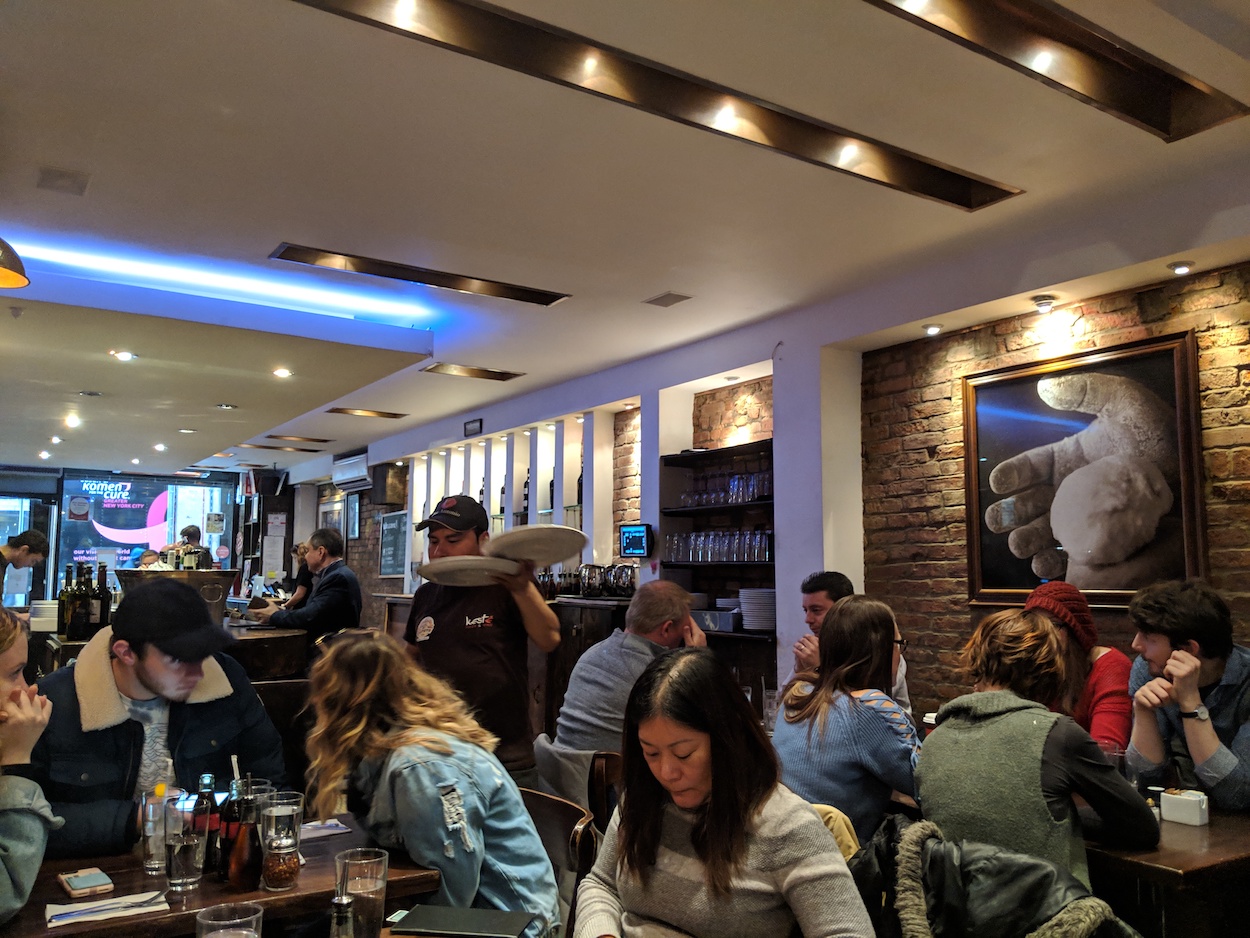 The restaurant bustled with life 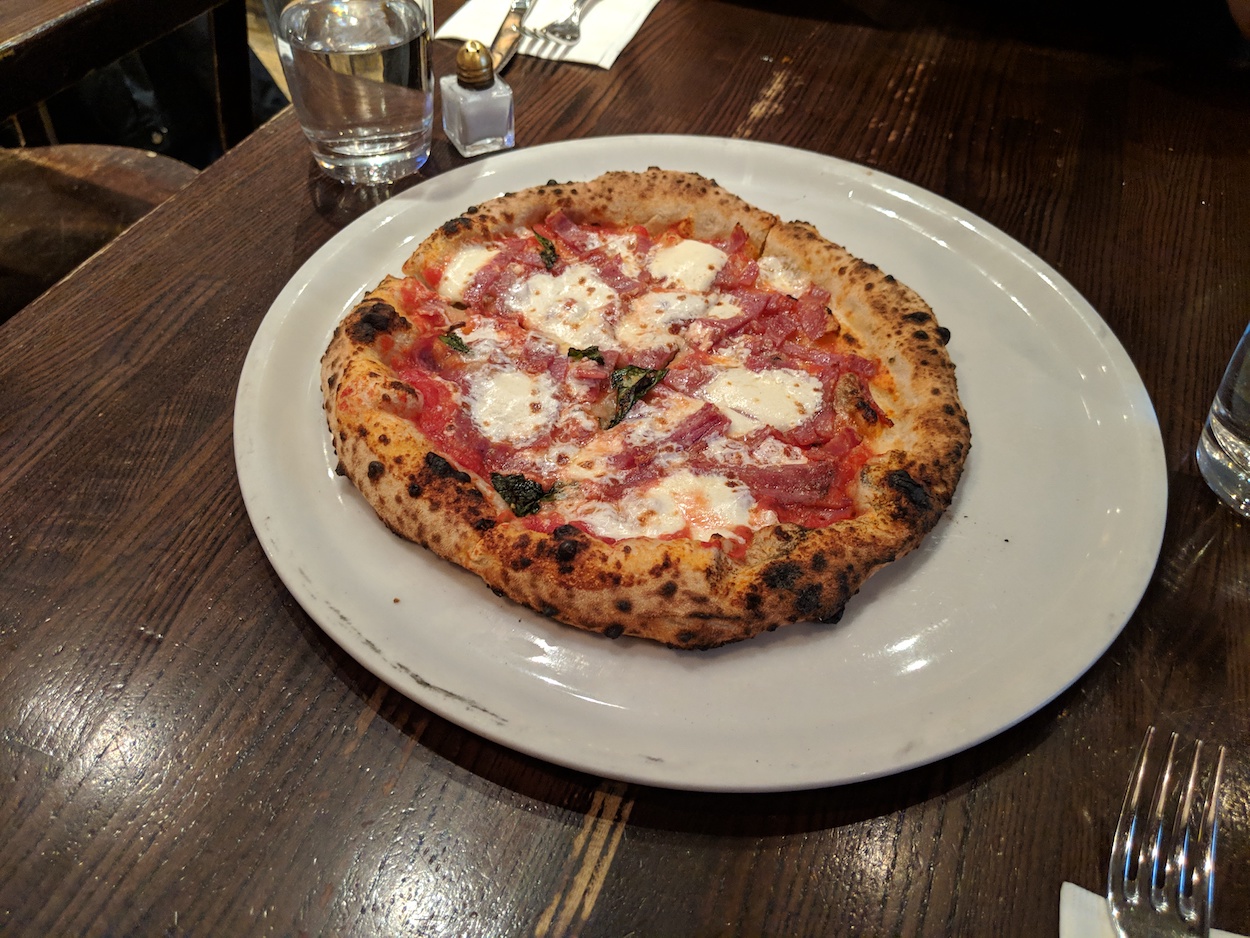 The selection of pizzas was mindboggling and much more varied than the average spot in the city, even offering fried pizzas (!!). There was no pepperoni (the base flavour for all the tested pies of the day, to keep a level of scientific accuracy), so I went for one with salami. The sauce was lacking slightly but it was made up for with the toppings, which were extremely flavourful. Even the smallest pizza was perfectly filling, but that might be because I had consumed quite a lot that day already.

This spot was a bit of trek to get to, having to travel from the tourist filled land of Manhattan to the more relaxed Brooklyn. Tania, who has lived there her whole life, claims that the borough is home to the best pizza in the city. She recommended Di Fara, which has two locations. I decided to head to the smaller and lesser known one, based in a food hall.

From the outside, this hall seemed unassuming. If you don’t look twice, you could easily walk past it without realising the wonders inside. Once you enter, you’re greeted not by an ordinary, dingy food court, but a place packed with high quality foods of various nationalities, coffees, and desserts. At the very back, tucked away neatly in the corner, was Di Fara’s smaller location. 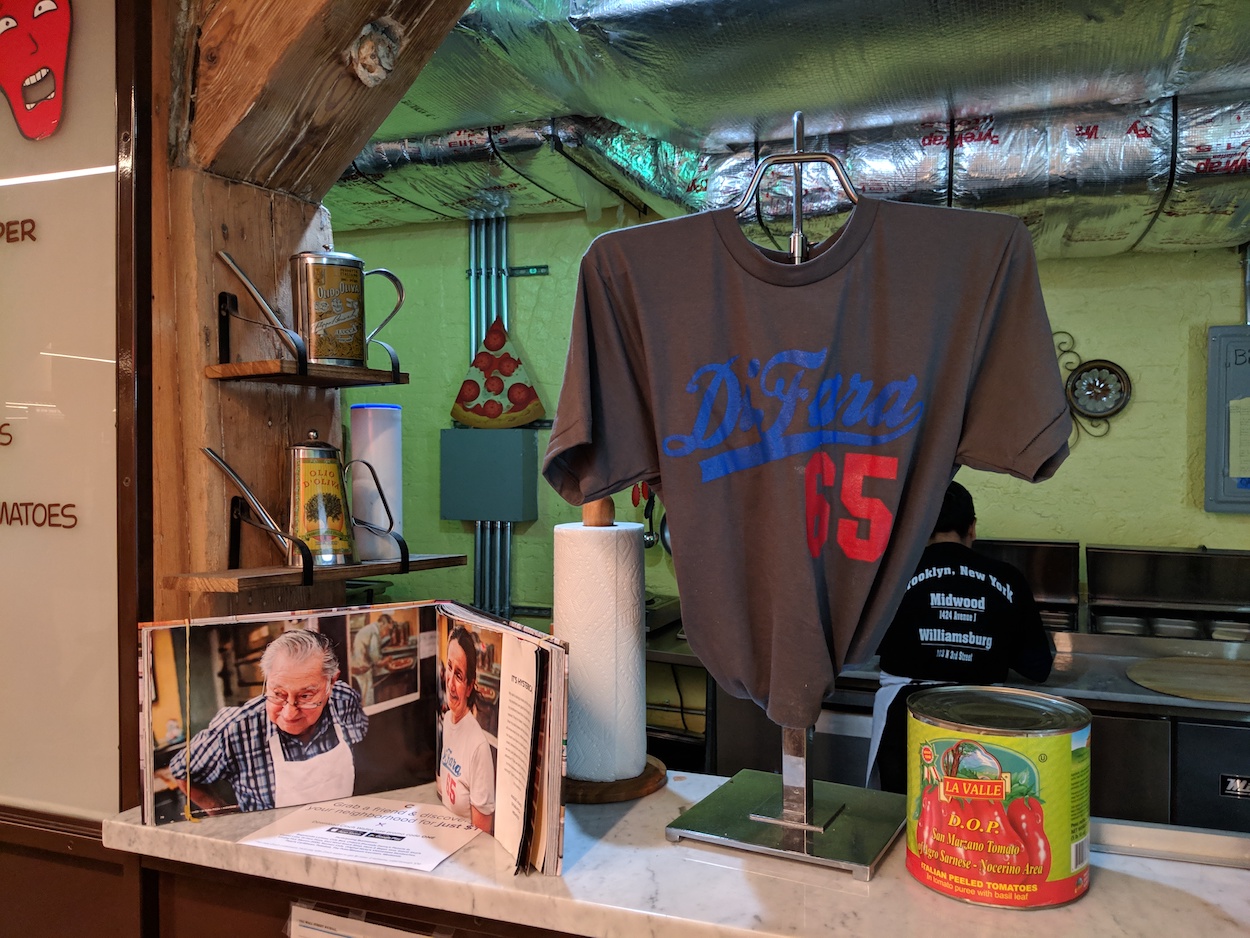 Merchandise sold at the ever popular Di Fara 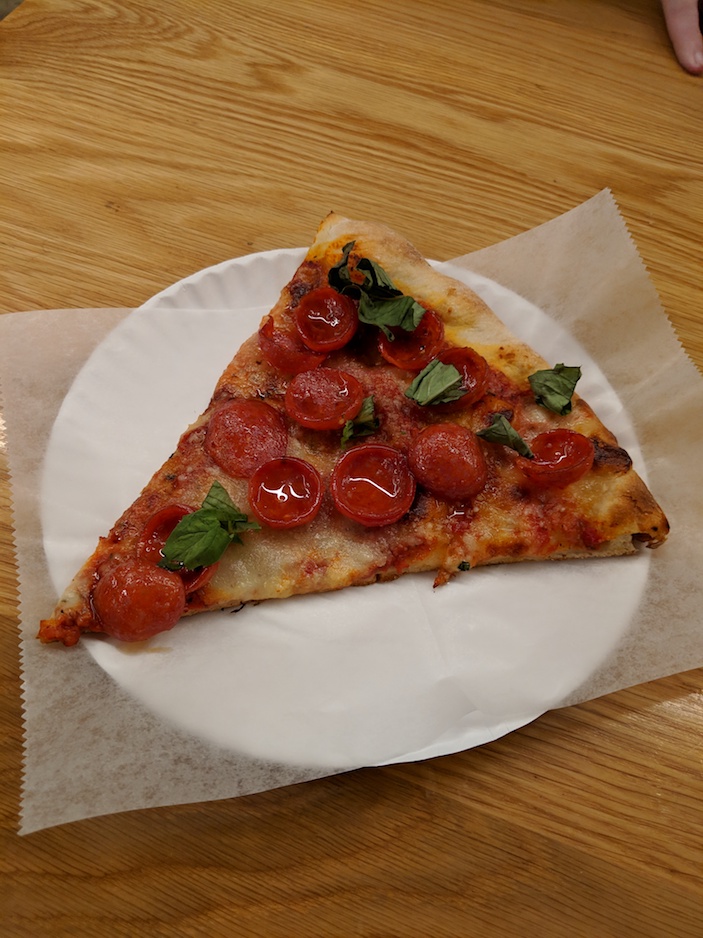 This was the first true slice of the day, and what a first slice to have. At $5 for an amount of pizza as big as your head, this place was great value for money. It felt like the fanciest slice I’d ever seen, with fresh herbs placed on top before serving. The pepperoni slices were the best I have ever eaten in my life – they had enough bite and flavour to make every other I have had in my 21 years seem inferior. Dining under the twinkling fairy lights hanging above, I felt a wave of bliss that one could only dream of. I had reached pizza nirvana. 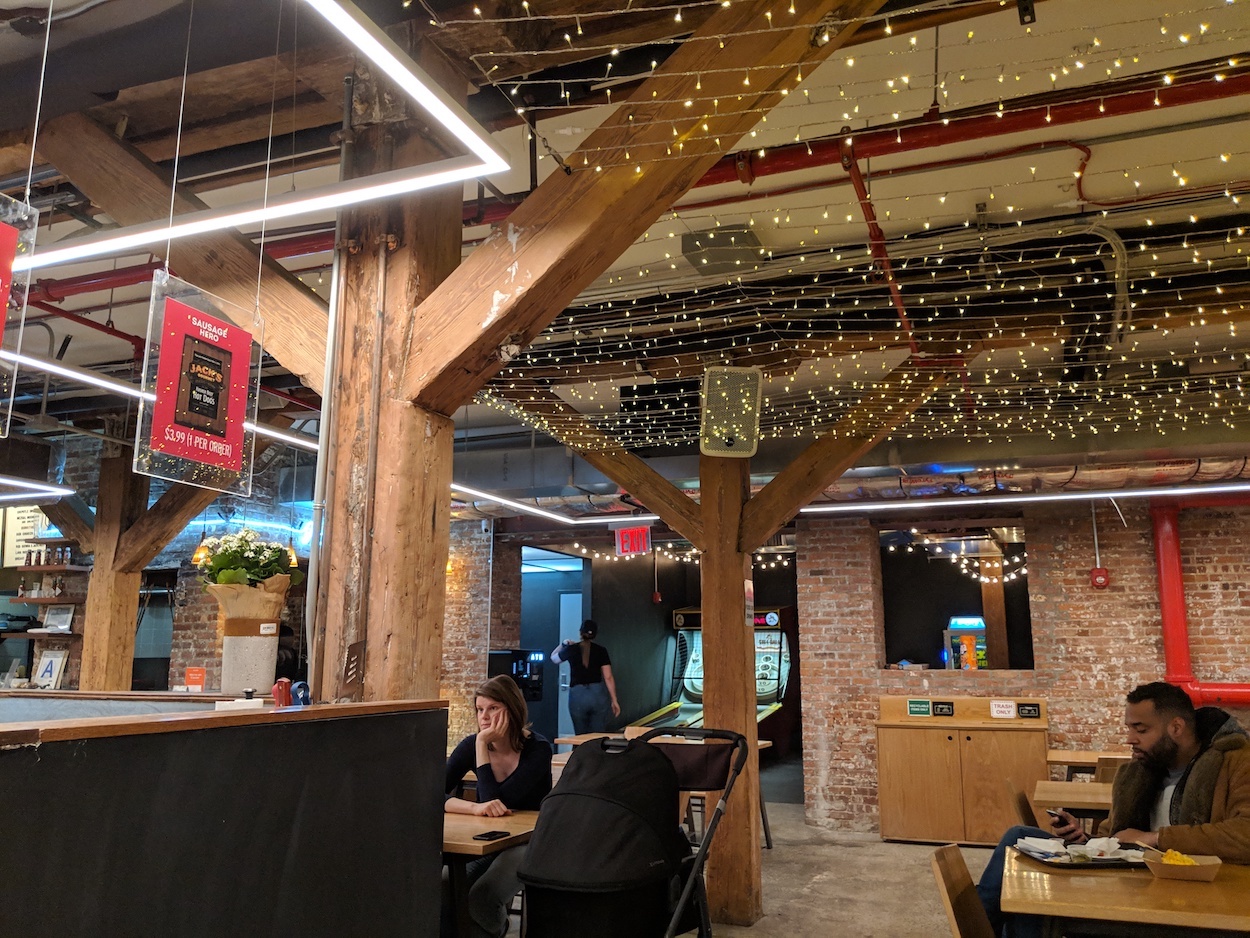 The atmosphere in said pizza nirvana

It was at a point during the L train journey back to Manhattan that something changed deep within me. Having consumed the equivalent of 3 medium pizzas in as many hours, the amount of carbs was beginning to catch up with me. I felt the grease begin to seep through my pores. Alas, I continued, if nothing but in the name of journalism.

Little Vincent’s was also recommended by Tania from Brooklyn. Being back in Manhattan, it was a familiar looking spot to many that I’d passed on the streets during my time there. As soon as you go in, you are greeted by pizzas on display that are as big as your torso. I couldn’t actually believe there could be food that big. 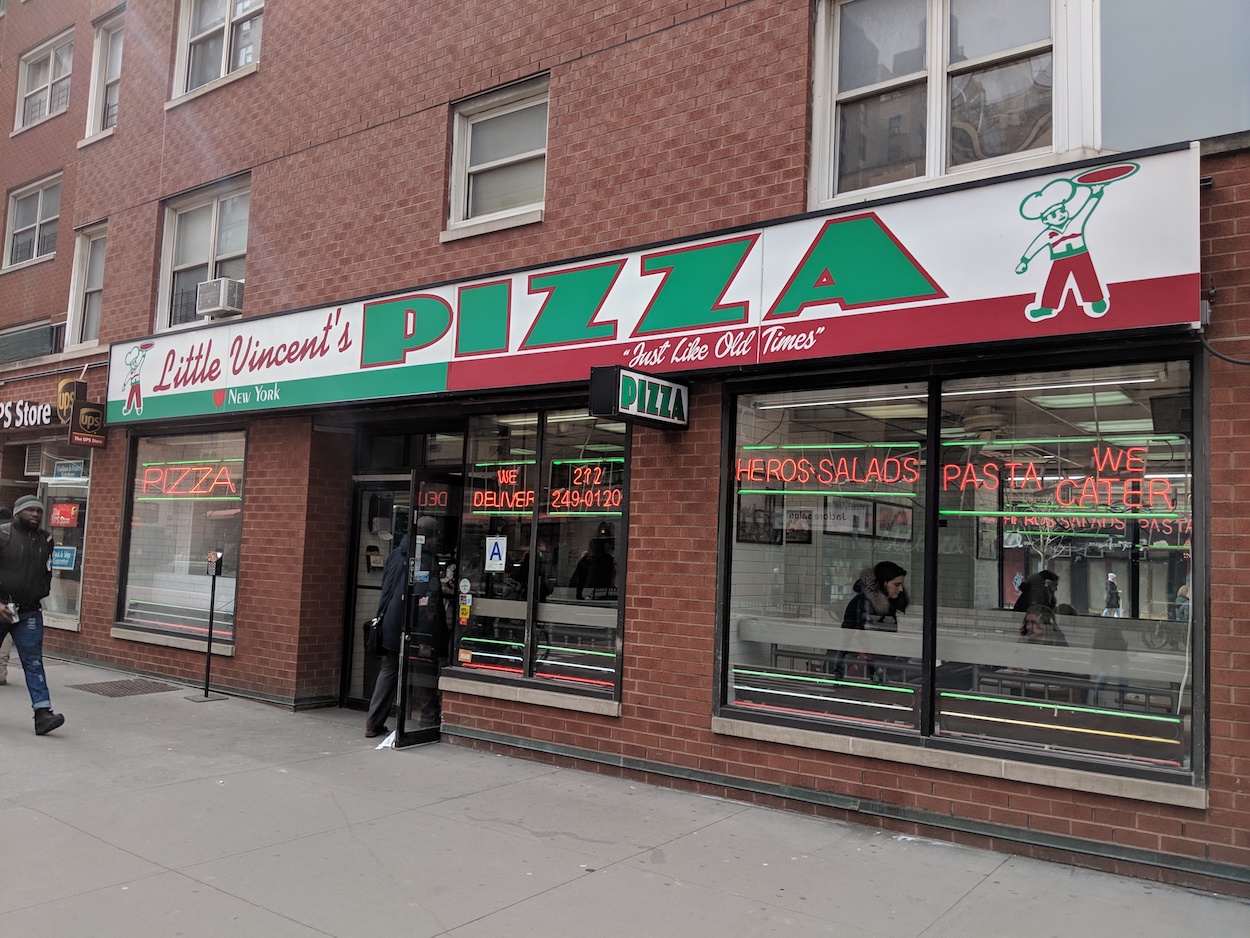 The third spot of the day 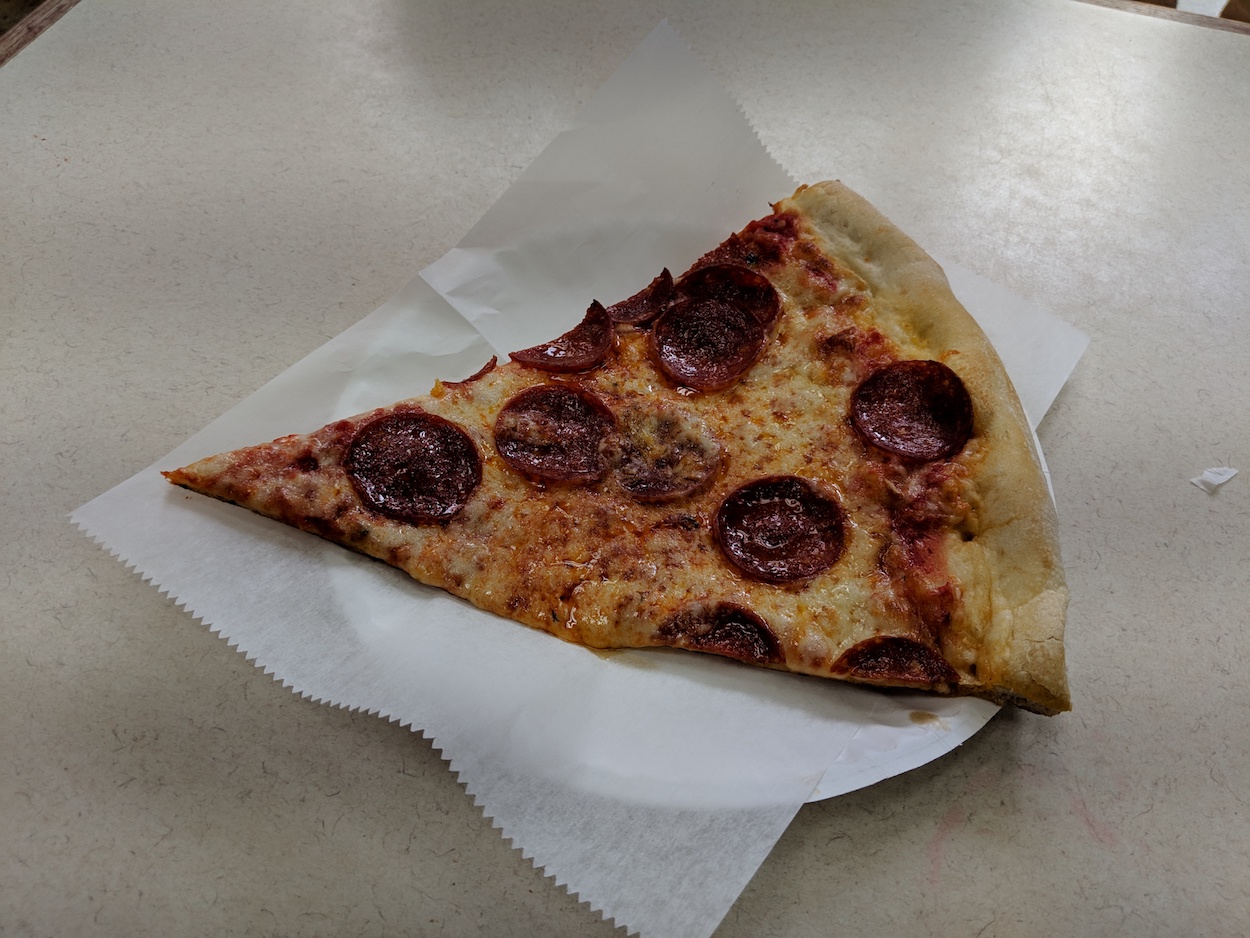 This pizza slice was easily the largest one of the day. It definitely gave you your bang for your buck. It was gloriously greasy, to the point where almost fluorescent orange liquid was pooling onto the paper plate. Fancy pizza, this was not. However, if you want a good old fashioned slice that makes you feel like your arteries are being clogged with every bite, this is the place for you.

This final spot had a special place in the heart of Dan from the Upper Westside, who also recommended John’s. Mama’s was his favourite place to grab a slice growing up, talking about it fondly and gushing about his excitement for Mama’s Too!, a sister restaurant that has recently opened in the Upper West Side. Needless to say, his enthusiasm sold me; I had to go.

I only wish I could have had the same zest and zeal as I pulled up to the food court it was situated in. At this point, my bloodstream was exclusively tomato sauce, my stomach lined with a layer of cheese. The world seemed like it was going in slow motion. I persisted.

It’s in an amazingly convenient location for tourists, only being a few blocks away from Times Square. Similar to Little Vincent’s, massive pizzas adorned the display cases. It was certainly nothing fancy, but the place had a charm to it that made me realise why it was Dan’s favourite. 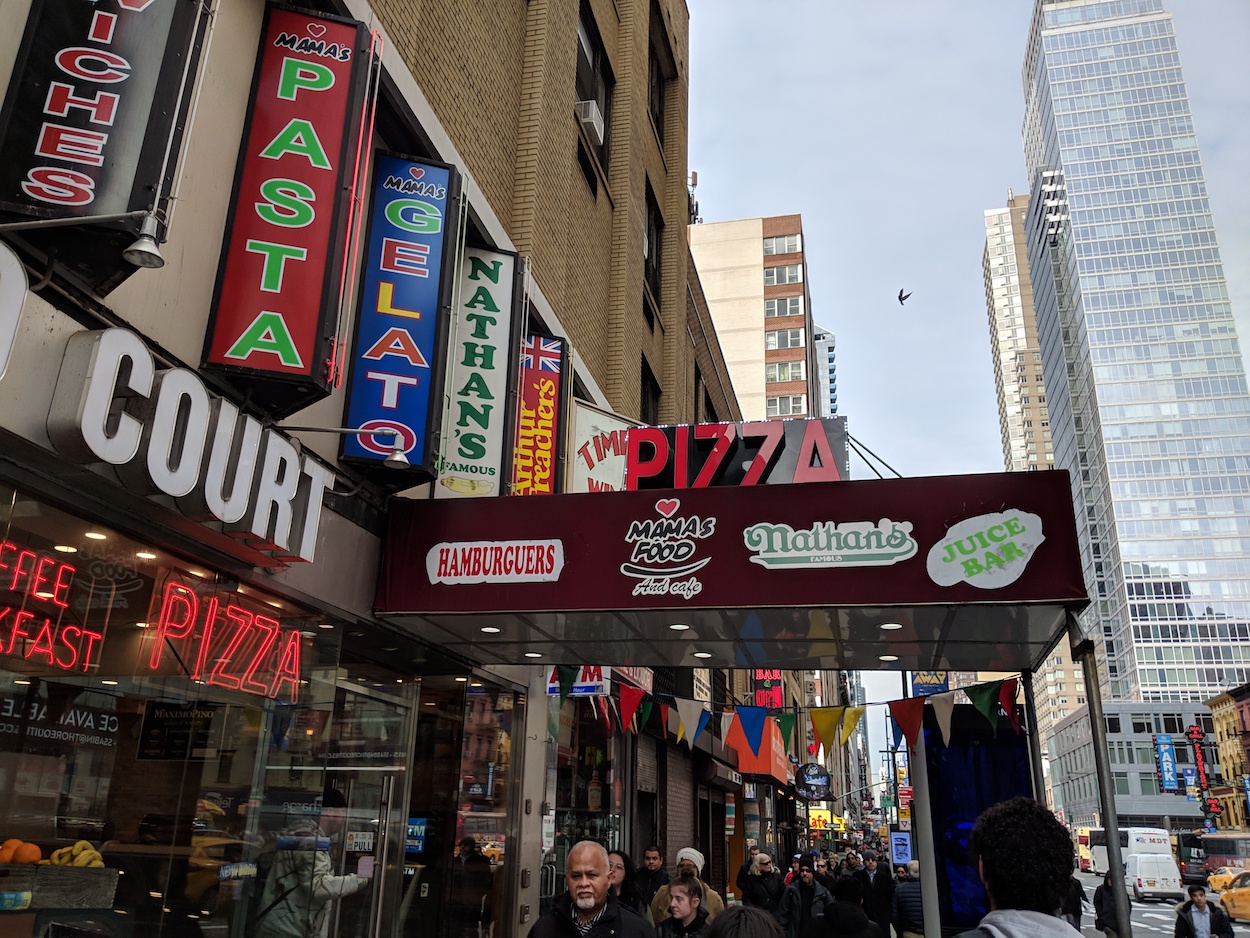 The final stop of the pilgrimage 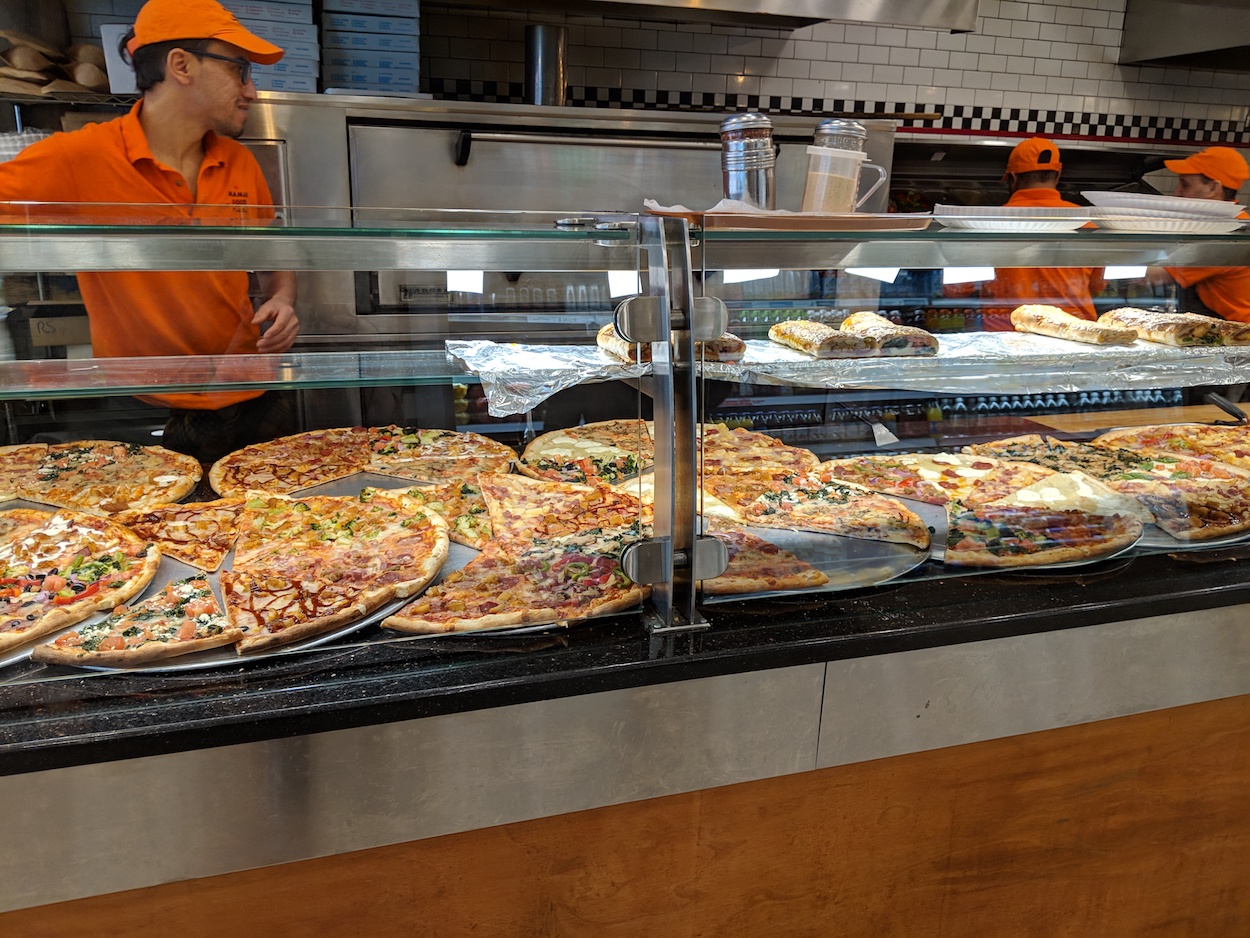 A variety of gargantuan pizzas on display

I feel bad for Mama’s pizza slices, because I cannot give them a review with the same enthusiasm as earlier entries. I remember the cheese was the cheesiest of the day, creating a beautiful blanket of dairy over the entire slice. That is the beginning and end of my critiques, for everything was a blur. My mind was foggy and I was ready to slowly roll myself back to the hotel and straight into my bed. I had what could only be described as a pizza overdose. 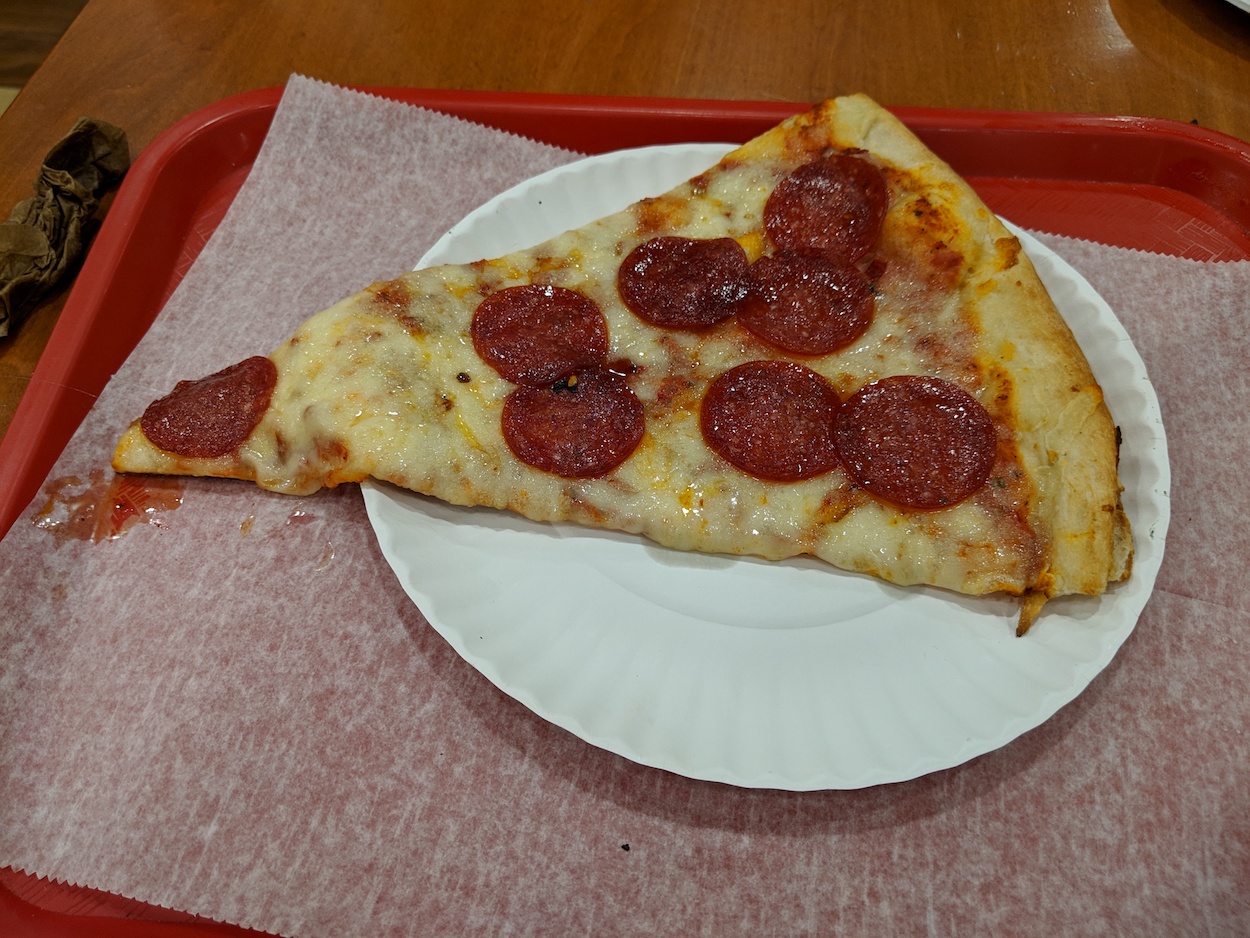 A perfectly cheesy slice to finish the day

The day was one of trials and tribulations, with the sheer amount of food I consumed slightly overshadowing my joy of eating said food. However, at the end of it, I can happily say that Di Fara was my favourite. It was worth the trek to Brooklyn, with a delightfully cheap yet beautiful slice in such a stunning and cosy setting. If you ever find yourself in New York, that’s where I would point you. Just maybe don’t try to eat as much as I did.