The Price of Success: Are City Fans To Blame For Underselling? 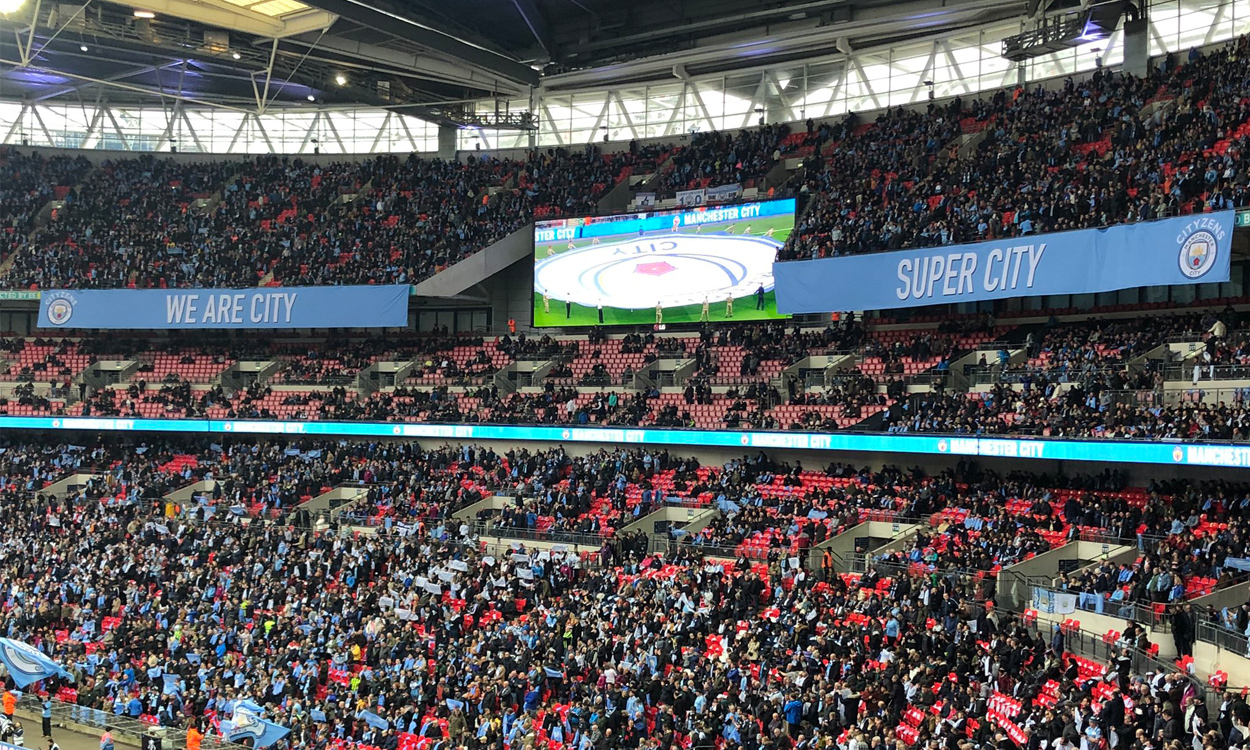 Manchester City Fans at Wembley for their FA Cup Semi-Final Match against Brighton.

Success often paints a target on your back, as Manchester City have found in the last week. The reigning Premier League champions faced an onslaught of abuse on social media for underselling their allocation in their FA Cup semi-final win against Brighton on Saturday. Brighton, who are undeniably a smaller club with a smaller fanbase than City, sold out their percentage of Wembley seats, whilst City were forced to return over 3,000 of their originally assigned allocation. Even then, City still undersold those that remained, leaving cracks of wembley red breaking through the sky blue City ranks. But what led to this lack of attendance?

During City’s meteoric rise over the last decade, they have won three Premier League titles, four Football League trophies, one FA Cup, and two community shields. But their fanbase, whilst fiercely loyal, has remained mostly the same size during this time. The crowd that was selling out the 35,000 seat Main Road in Division 1, is now struggling to consistently fill the 55,000 seat Etihad Stadium.

Most teams that become this successful are party to plenty of so-called ‘bandwagon’ fans, who turn up when the going’s good, then disappear when the success dries up. But being in the shadow of one of the biggest clubs in the world has definitely affected the amount of fair-weather fans that City have been able to draw in. Historically, City played second fiddle to their red neighbours Manchester United, but with City’s quite literal change in fortune, they are now their competitive equal/better.

Author of Reluctant Hero, Colin Bell, Manchester City vlogger and fan Ian Cheeseman attended the semi-final. He said: “When City got to the semi-final in 2011, the first time they’d been in a semi-final since 1981 the noise was deafening, the atmosphere was deafening. And it might sound as if it’s being blasé, but City have, I think, 17 times to the New Wembley in the last few years. Inevitably there is going to be a little bit of blaséness. And often the more vociferous people, the ones more likely to sing, are often the ones who come from the more working class backgrounds, who decided to give it a miss. Other people will have slotted in, people took families – families don’t sing as much. So there was a differnet contingent of City fans who went to that game.”

“There’s a big proportion of a generation of supporters who weren’t inticed to watch city when the money came into the league with the inception of the Premier League. So therefore the average fanbase is older, and older fans, as a whole, generally don’t sing as much. I don’t think you should judge a fanbase purely on the noise they make.”

It’s also important to consider the cost of this level of success for the average supporter. Wembley tickets can cost upwards of £80 for standard entry depending on the seat. Not to mention the £50-£100 that a match-goer will have to hand over for travel. Add on the frankly extortionate Wembley concessions, with a couple of pints for good measure, and a supporter is looking at a £200-£300 day out.

Most fans are able to write this cost off with a trip to Wembley as they usually come few and far between, but for City this was their 4th trip to Wembley this season, and with the win another will be coming. Alongside their Premier League and Champions League fixtures, that equates to 4 games in London in the space of 16 days playing Fulham, Brighton (Wembley), Tottenham, Crystal Palace. 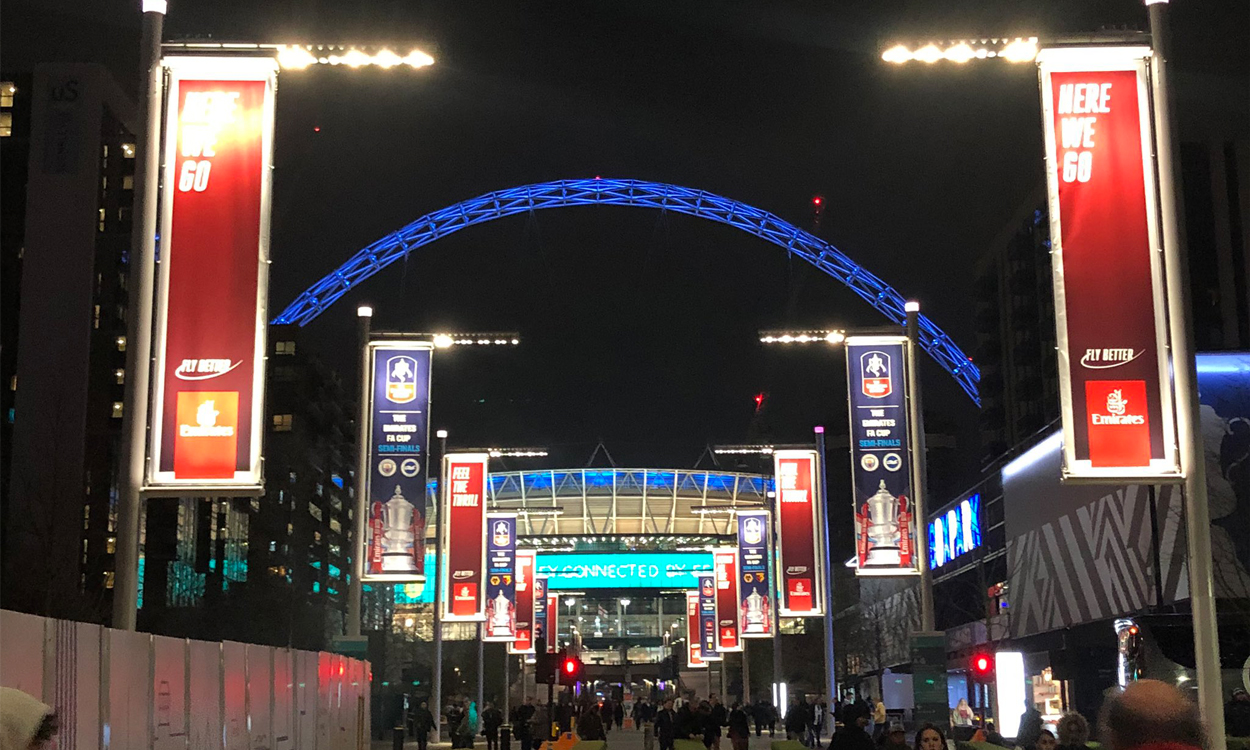 Manchester based writer and journalist Tom McDermott said: “I’m a bit old school, I never believe that an FA Cup Semi-final should be played at Wembley. Especially when the final of course is at Wembley.”

“You see games at the Etihad where the stadium isn’t full, so if they can’t sell out their home stadium for when they’re someone like Cardiff or Wolves, then they’re never going to fill Wembley for a cup semi-final.”

“You’ve got to factor in their success as well. They’re expected to win the semi-final of the cup so the fans probably thought they wouldn’t go to the Etihad to watch this, so why would they go to London to watch it? They may as well wait until the final. I’m not saying all fans do that, many many fans will travel consistently. But I think City, like all clubs, have a hardcore following of fans. But, that group isn’t as big as United’s, or Liverpool’s, or Arsenal’s, or Spurs’.”

Ian Cheeseman added: “I followed Schalke and in their standing section, where most of the noise comes from, those tickets are very cheap. And the average age of those spectators in that 11,000 standing stand is much younger than the city supporters, and I think that makes a big difference.”

The Bundesliga have also subsidised travel in and around the cities matches are held in by including travel costs in the ticket price, so no paying for busses, trains, trams, or the underground when you arrive within the city.

However, with the rampant commercialisation of English football thanks to the international draw the Premier League brings, it’s hard to see a system like that being implemented any time soon. The powers that be will likely move to consolidate their power, ensuring their investments are safe, further shifting the beautiful game into an ugly business.