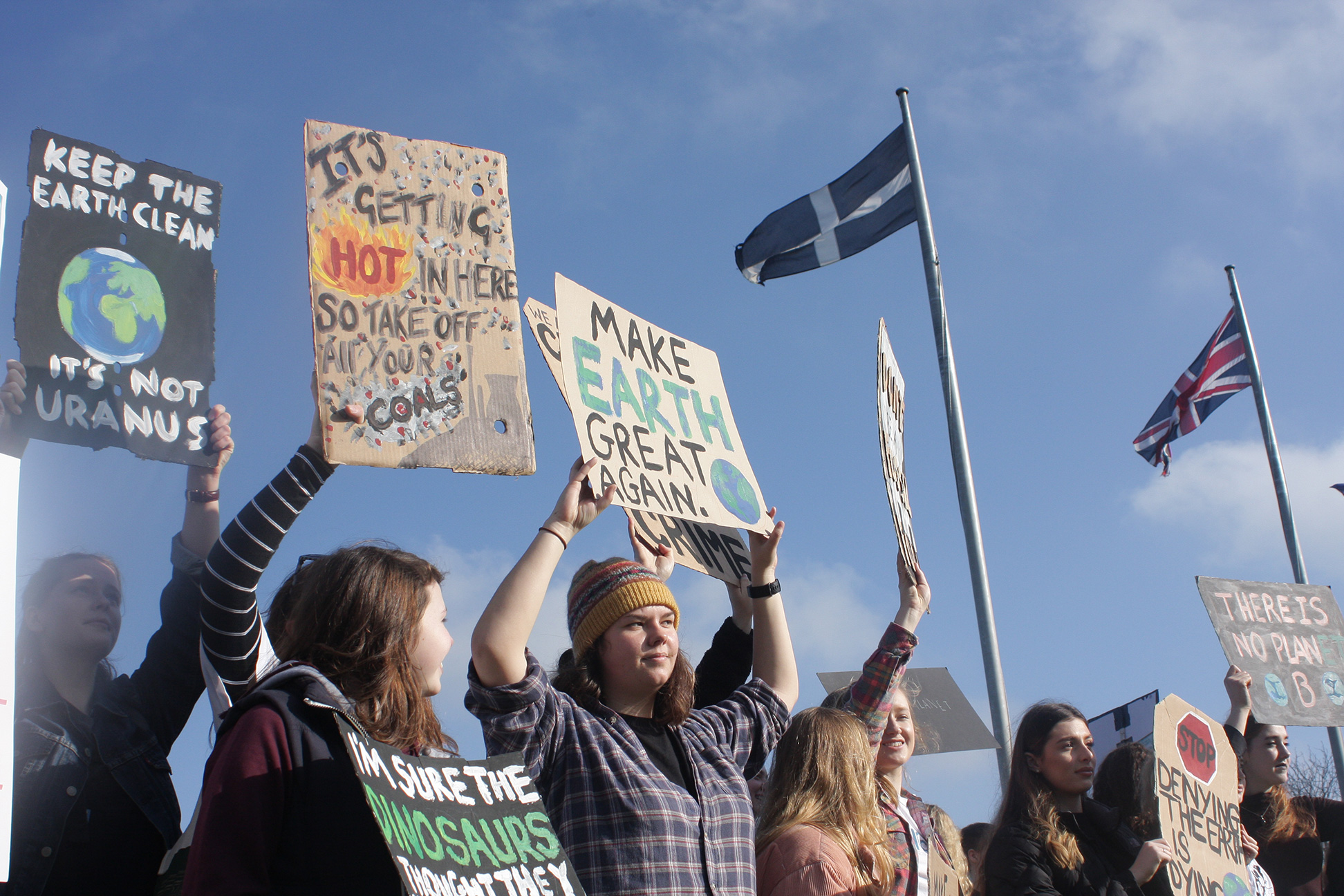 Various protests holding out signs towards the roads of Truro.

Students of Cornwall gathered outside Truro Council Hall to strike, amongst many making waves across the UK. But what impact have they had so far, and what have been the responses?

The scene in Truro was lively, as the turnout was in the hundreds, impassioned protesters spoke over the PA system, and cars blared and honked in response. These protests were comprised of any students, parents, and concerned locals alike, who demonstrated at the Truro Council Hall for YouthStrike4Climate, in what has been a sweeping movement all across the UK.

The event was mostly organised by a handful of volunteers for the UK Student Climate Network, and amongst one of them was Rosie Smart-Knight. Although she is only a student herself at Truro College, she displayed a lot of enthusiasm in the strike and believed in the impact of her actions.

“We’re not actually here to offer solutions for climate change; we’re here to put pressure on those who could. We’re students, we’re risking our education here to put across the point that we want action and we want it now, and we expect those who have already had the liberty to fulfil their educations to deal with the problem.”

This strike is grounded in a lot of context, as the movement was originally spurred on by Greta Thunberg, a 15 year old student from Sweden. On the 20th of August, she stopped going to school and started protesting outside parliament in central Stockholm, particularly in a year when Sweden was hit with sudden heatwaves and wildfires, resulting in the hottest summer in 262 years.

While Sweden is notable for its attention towards climate change, resolving to become carbon neutral by 2045, Thunberg claims it has one of the biggest carbon footprints.

This protest is especially relevant in the context of Cornwall as the Cornwall Council have recently declared a Climate Emergency, citing incidents such as the flooding in 2017 and the snow storm last year. Sudden changes in weather are becoming much more common, and in response, Cornwall Council is aiming to become carbon neutral by 2030.

The fact that Thunberg’s protest has inspired a whole action worldwide is an impressive feat, as many who came to the protest acknowledged her as an influential figure, including UKSCN Organiser Smart-Knight. The local impact is noticeable as well, as young speakers have actively posed questions to the Cornwall Council. Since Cabinet Portfolio Holder Sue James made an appearance, she was open to explaining the council’s stances on certain issues such as a plastics manifesto, recycling bin shortages, and renewable energy, encouraging students to lobby their schools to make certain changes. 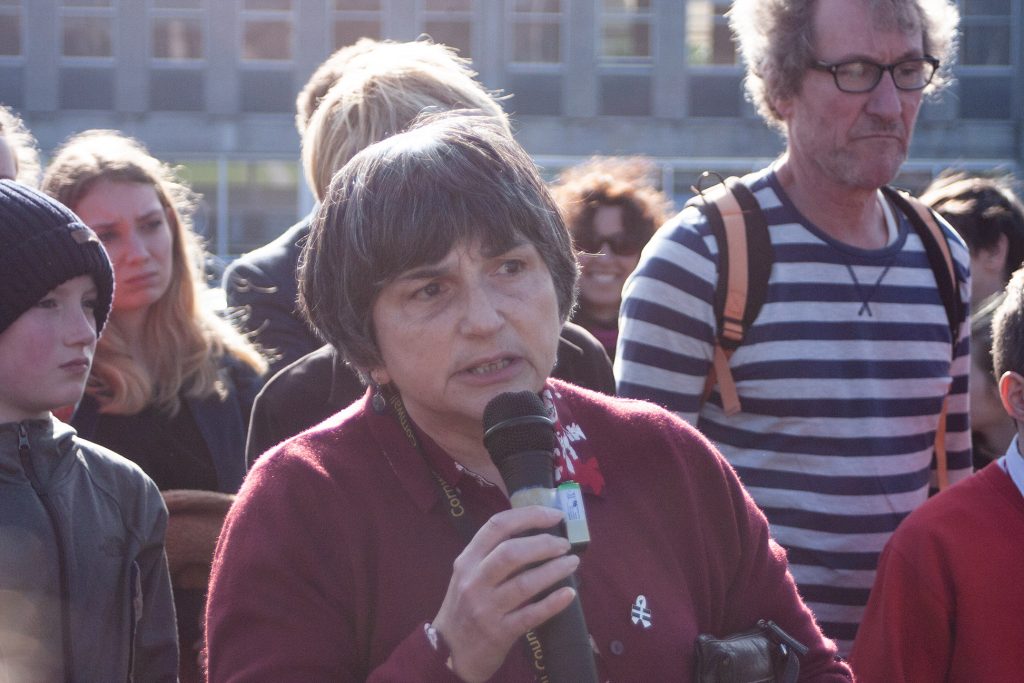 Sue James responding to questions by students and concerned parents.

However, in terms of how much sway this will have in the future, as well as how much students will be able to take action is up in the air.

Richard Clark, member of the Green Party and director of Circling Cornwall, came to the event to serve tea and coffee to support those making the protest. He expressed concerns about students being allowed to miss school to participate in these strikes, as some schools encourage it while others bar it altogether.

“There is a real mix. Apparently, Truro College students, who you would hope would be the most trusted, their PR department, mainly for reasons connected with Ofsted and with money as far as I can tell, are really concerned their curriculum is being eroded by today.” 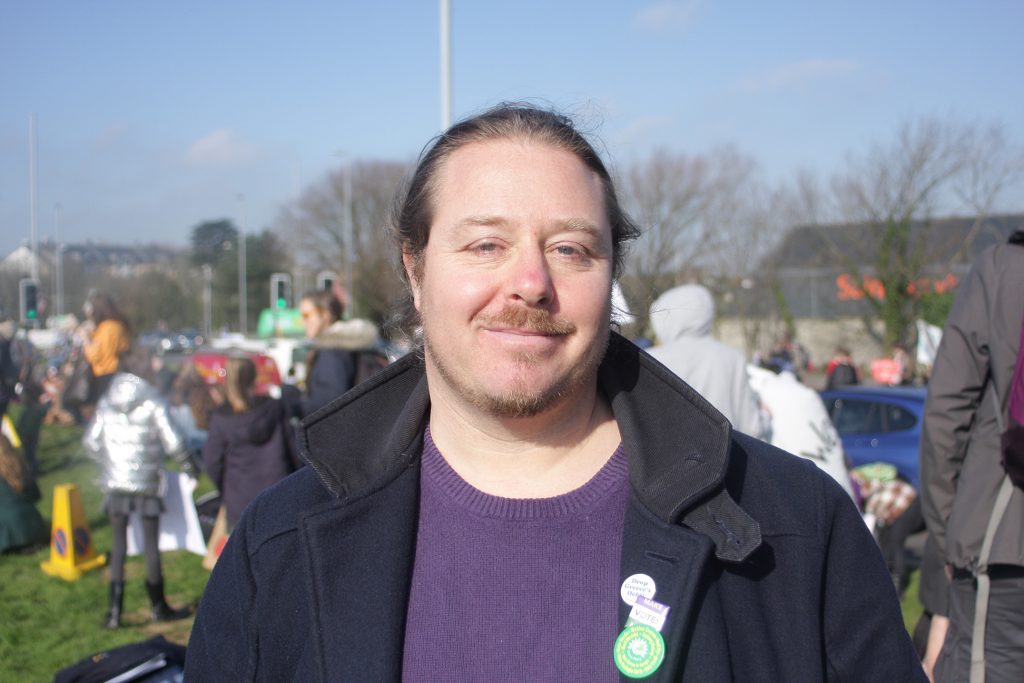 A member of the Green Party, Richard James giving his two cents on the matter.

PM Theresa May has criticised the movement, as her Deputy Official Spokesman states: ‘Disruption increases teachers’ workloads and wastes lesson time that teachers have carefully prepared for.’

While the strike in Truro was uneventful for the community police, as they were there to oversee the situation without issue, in much more populated places like London where the protest also took place, arrests were made on some of the students there. The Green Party tweeted:

The Green Party is extremely concerned to hear reports of arrests being made at the #YouthStrike4Climate. Peaceful protest is fundamental to our democracy and it is outrageous to hear reports of young people being arrested for taking action to protect our environment.

Whether or not it was deserved is up for public opinion, since there’s the issue of protesters genuinely breaking the law vs protesters being arrested simply for dissent.

While global impact is debatable at the moment, in terms of immediate local impact, the call for action is loud, and will probably continue on in next month’s protest at the same location on March 15th. Another speaker of the Green Party and Falmouth Lecturer, Thomas Scott, was impressed with the response as well:

“What’s amazed me about today; it’s been very spontaneously organised by the students themselves, and this is happening not just in Cornwall, but throughout the UK, and indeed all over the world.

It’s one of the most positive things I’ve seen in the last ten years. Young people are really not prepared to watch older people ruin the world and not do anything about it.”