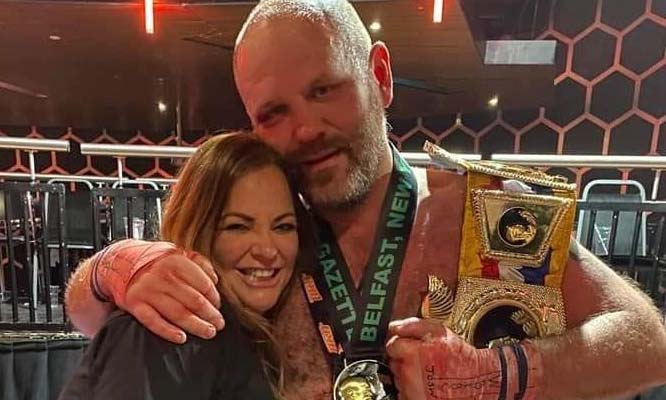 A former bad boy professional boxer turned bareknuckle heavyweight champion has been giving something back to the Cornish community that has helped him transform his life.

Jody Meilke, once known as ‘one-man riot’, won the title in January after defeating fellow ex pro and former Anthony Joshua opponent, Welshman Dorian Darch at the 02 arena in his very first bareknuckle contest and with only 10 days’ notice.

Meikle, 41, who moved to Newquay last year from Scunthorpe, took on the title challenge to earn some extra cash to make the trips back to see his children in Lincolnshire easier and is now the proud owner of the BKB world heavyweight belt.

The move to Cornwall provided a dramatic change in Meikle’s life after he found himself in trouble with the authorities in his hometown. Meikle now considers himself an adopted Cornishman and even proudly displayed the St Piran’s flag on his shorts in his title-winning contest.

“I’m glad I’ve settled down here, I love the people and enjoy working here. I used to be a bit of a reprobate and it feels really nice to give something back for the kids and the local community.”

The sport of legitimate bareknuckle boxing is the fastest-growing combat sport in the UK since its inception in 2016. Many former professional boxers and MMA fighters have taken part which has done a tremendous amount to promote the sport.

Meikle, a veteran of over 70 professional contests, commented on the difference between getting hit with the gloves and without: “During the fight I didn’t feel the difference, the adrenaline was running that much. Two days afterwards I felt like I’d been in a car crash though.

“When I was gloved boxing, I was able to fight every weekend and be back in the gym days after fighting. There is no way that’s possible with bareknuckle. My jaw was sore, and my ribs took a bit of a pasting. I was a bit tender for a few days.”

Meikle is now preparing for his first defence of his title in June 11th in a rematch with Darch at the 02 arena London.